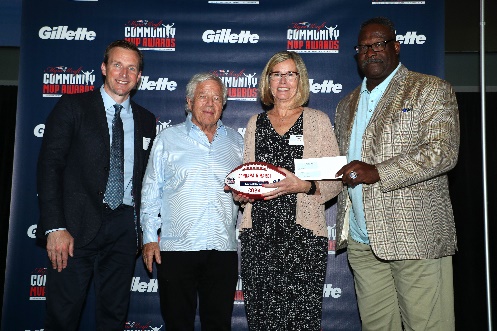 Hopkinton’s Barbara Girardi recently was recognized as a winner of a Myra Kraft Community MVP Award, presented by the New England Patriots Foundation.

Girardi, who was honored along with 25 other volunteers at an awards luncheon at Gillette Stadium on June 8, was presented with a $10,000 check for Live4Evan, a charity she created in memory of her son. Evan Girardi died from a congenital heart defect at the age of 20. His family and friends established an independent housing program for families receiving long-term cardiac care in the Greater Boston area.

Girardi coordinates apartment availability for families and offers support during their stay. She works closely with Boston-area hospitals and social workers to ensure they receive proper care and support. Since its inception, the nonprofit has opened five apartments and housed more than 100 families.

“It is such a tremendous honor to be considered alongside the other amazing volunteers for this award,” Giardi said. “Live4Evan helps families with the continued support of our incredible community and partners such as Gillette and the New England Patriots Foundation. Their contribution allows us to work with families in crisis, who need a place to stay. This award means the world to me and the entire Live4Evan organization.”

Since its inception 25 years ago, the Myra Kraft Community MVP Awards program has recognized more than 450 volunteers and donated more than $3 million to support nonprofit organizations across New England.