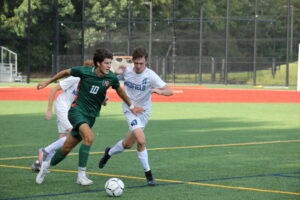 Senior Owen Schnur, a returning Tri-Valley League All-Star, is one of the keys to the Hillers’ offense. PHOTO/JOHN CARDILLO

The Hopkinton High School boys soccer team wasted no time getting out of the gate with three wins and a tie against one loss, with a positive goal differential that coach Garrett Sawyer said is indicative of a team that is well balanced and talented on both ends of the field.

“The kids are committed,” Sawyer said. “And they are working hard.”

The Hillers are happy to be on the field under more “normal” circumstances after COVID-19 impacted both the rules and the schedule in 2020.

“It’s outstanding, last year was very frustrating,” Sawyer said. “My players love to play the game, and last year was really disappointing. Even though we did get a chance to play, with the significant rules changes it just didn’t feel like normal soccer, so that’s definitely a big positive this year.”

The modified 2020 schedule also has created more unknowns for 2021 than there might be in a typical season. Hopkinton only played half of its normal opponents last year, and some of the early returns suggest that teams that are not typically at the top of the standings may be more competitive this fall, Sawyer said. Millis is off to a strong start, he noted, and Holliston looks tough after returning a large contingent of players from a good 2020 roster.

The Hillers are hoping their balance will render them able to compete with anyone in the Tri-Valley League. Four forwards, Owen Schnur, Sam Vasington, Sean Golembiewski and Pierce Farrell, are all playing well up top and aiding in the Hopkinton attack.

“I think building Max’s confidence in the net is going to be a focus for us,” Sawyer said. “How he would do was a bit of a question mark because he backed up Patrick and didn’t get many opportunities to play. Every time we are out there, he is gaining confidence. He has done well so far, and commanding the defense verbally is an area where progress has been made and we can continue to build.”

Sawyer is playing the long game when it comes to improvement and making sure his team is peaking at the end of the season. Settling into specific roles is going to be important over the early part of the season, he said.

The goals, Sawyer said, are going to be set high.

“We are going in with a lot of strong players, a lot of seniors, so I think our expectations are to have a very strong record,” he said. “We want to compete well against the best teams in our league and then hopefully with some of the best teams in the state in our division.”