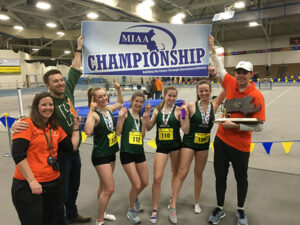 Hopkinton High School has a legacy of success in running sports, and the 2019 edition of girls indoor track and field added to that in a big way. At the Reggie Lewis Track and Athletic Center in Boston on Feb. 14, the Hillers won the MIAA Division 3 championship.

“It was a really exciting night and a total team effort,” coach Jean Cann said. “I had talked to the team in the days before, and based on scoring according to entries and seed times/distances, we were slated to get second to Sharon by five points, with Hingham, North Attleboro, and Milford right behind. I told them we weren’t going to change the basics of what we’d being doing all season, but that the results on paper were just that and that any extra place they could pick up could make the difference.

“They really get inspired by each other, so when a few people start doing well, it tends to snowball in a positive way, but when things don’t go right in one event, they are also good about not letting anything negative gather momentum. If someone else didn’t place as well as expected, the next event, it seemed like we’d have someone exceed expectations.”

The title was the program’s first since 2005.

“This is a special group with a lot of seniors, and I told them that the team had come very close, sometimes agonizingly so — half a point their freshman year — to winning this meet, but hadn’t since 2005, and that they had already had a very successful season no matter what happened, but that state D3 title and a banner in the gym would be a lasting testament to how strong this team is,” Cann said.

“Schuyler was amazing,” Cann said. “She went from never having won a divisional title in any season to winning two! We planned for her to run the mile tactically to save something for the 2-mile and also to avoid having Milton’s top girl sit on her and out-kick her like she did last year. She executed that race perfectly. In the 2-mile, she and Olivia were able to work together and had some help from a Billerica runner who pushed the pace for a while. For them to place 1-2 was a huge highlight and obviously a lot of points.”

Kate Powers was second in the shot put, the 4×800 relay team (Jones, Hope DeLuca, Grace Joy and Gooley) finished second, the 4×200 relay team (Delaney Mick, Hailey Tolson, Caroline Estella and Maggie Allen) took third, and Mick was sixth in the 55-meter dash. All of the aforementioned athletes advanced to the All-State meet.

“Our relays really helped,” Cann said. “We were only predicted to get fifth in the 4×200 and not score in either the 4×400 or 4×800, but we scored in all three. Caroline Estella was sick with a bad head cold for most of the week, so we talked to her and decided to pull her from her individual event [300] to maximize her potential in the relays. She was on both the 4×200 and 4×400.

“We’re a very balanced team this year, with scoring potential in every event,” Cann added. “Kate Powers has been an awesome addition to the team and she exceeded her seed with a second place in shot put. Every little thing like the relays and Hope DeLuca and Catherine Dacey running personal bests to score points contributed, as we only won by four points [over Milford].”

On the boys side, the Hillers finished sixth as a team. Top individual performances came from brothers Alex Brown and Nick Brown, who were second and fourth, respectively. in the 2-mile. Ian Cann was fifth in the 1,000 and Harrison Prucher was seventh in the 55-meter hurdles. Hopkinton piled up points in the relays, as the 4×200 squad (Chris Benham, Devin Kelly, Aidan Rowell and Prucher) took third, the 4×400 team (Patrick Barnes, Benham, Kelly and Julien Fernandez) finished fourth, and the 4×800 team (Cann, Alex Brown, Cody Ottinger and Anthony Zeissig) came in seventh.