Eagle Scout project inspired by concern for those with special needs 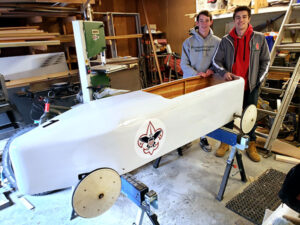 Hopkinton Eagle Scouts Patrick Barnes (left) and Jack Riley pose with the Soap Box Derby race car that they built to accommodate two riders, including one with special needs.

To earn their Eagle Scout badges, Patrick Barnes and Jack Riley undertook a tremendous endeavor by building a pair of life-size, gravity-powered race cars that incorporated a different design. By modifying existing Soap Box Derby kits, they were able to add a back compartment to a car that normally is a one-person vehicle.

“It took us a year and a half to complete,” said Barnes, a senior at Hopkinton High School. “We started the project when I was a sophomore and when Jack was a junior.”

Barnes, who drew particular inspiration from his mother’s work as a special education instructor as well as two cousins (one of whom passed away in 2010) who were born with Down syndrome, originally came up with the idea after seeing a similar car at an out-of-state competition some years back.

The Soap Box Derby, a national organization that sponsors local youth race competitions, supplies all inclusive stock car kits to participants. There are several age divisions, in which racers can compete locally and at a national level.

In the case of Barnes and Riley, they had to do everything from scratch.

“They didn’t design a kit for what we were trying to make,” Barnes said. “The only things we used from the original design kit were the axles and braking systems.”

Each custom-designed, two-seated stock car allows a special needs racer to have an adult or more experienced person ride along in the back. With the help of both their fathers, Barnes and Riley spent most of their time assembling the nearly 900 strips of wood that had been precisely cut to specification. But even with added expertise, the pair toiled on average four nights per week to see the project to its completion. In all, Barnes estimates the total time commitment was 800 hours.

Barnes’ father, Bob, was particularly helpful since he had prior experience building these types of cars.

“My dad had built a bunch of these cars from kits. He was really good at putting them together to make sure that the car would be fast,” Barnes said. “He is really big in the Soap Box community.”

Riley, a freshman at Westfield State College, could not agree more.

“Patrick’s dad was the mastermind behind the project,” Riley said. “He took us through all the steps on how to build the car.”

The cars were finally finished in June, and the timing couldn’t have been better. Barnes, who had been participating in races since his grade school days, explained that the completion of the project coincided with a competition in Arlington, where the two cars would finally be unveiled and ultimately find a permanent home. It was in Arlington, the unofficial state hub for the Soap Box Derby, that a special needs rider became the first person to break in the two vehicles.

“In all, there were three runs with the cars in Arlington. They had a special needs kid in front with an experienced female rider in the back,” Riley said. “The event started off with regular competition races then the special races took place, and after threes they went back to the regular races.”

Although Barnes and Riley do not know for certain, the two cars may end up being taken to the upcoming world championships in Akron, Ohio, where riders from all over the United States and several foreign countries will converge. What is clear is that the generosity and goodwill of two Hopkinton Boy Scouts will be remembered and felt by the entire Soap Box community for years to come.

This past August, in a ceremony that was the culmination of their hard work on this project as well their nearly decade-long stint in scouting, Barnes and Riley received their long-awaited Eagle Scout badges.