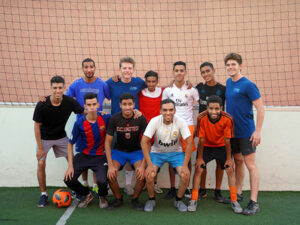 Hopkinton High School rising senior Simon Rutter traveled to Morocco this summer to study Arabic in the West African nation and ended up making a lasting impact on his temporary community by helping to create a soccer program to benefit hundreds of students and local orphans.

“The love for soccer in Morocco is unbelievable,” Rutter said. “A friend of mine from the summer program and I decided to coordinate with the director of the school where we were studying and a local orphanage to lay the infrastructure for a youth soccer program.”

Rutter and his friend, Michael Holly of Grapevine, Texas, set an ambitious goal of trying to raise enough money to fully fund the program for five years, covering the cost of fields, coaches, equipment and other necessities. They turned to their respective communities for help through an online fundraising drive (gofundme.com/f/free-soccer-program-for-moroccan-youth/), and both the Bay State and Lone Star State responded.

“It’s amazing to see our Hopkinton community come together to support a program that will help the community here in Morocco,” Rutter said.

In addition to studying Arabic six-plus hours per day at the Center for Language and Culture, Rutter and Holly poured numerous hours into tackling the logistics needed to start the soccer program. They worked with teachers and student leaders, who took over the teams after Rutter and Holly headed back to the states.

Rutter said the school is broken up into different classes, which could help spawn some friendly rivalries within the school, and as many as 30 to 40 percent of the participants in the program will come from a local orphanage called Maison de l’Enfant Bab Ghmat. Tournaments will be held every trimester, Rutter said, and the program will include girls teams, which he said is “completely unheard of” in the region.

“In North Africa and Morocco, there is a lack of extracurriculars, there is not a lot of initiative and funding for them,” Rutter said. “There are not many girls soccer teams and no youth women’s soccer programs, so this is going to give women a huge opportunity to play soccer.”

Rutter ended up in Morocco after he was selected for the U.S. Department of State’s National Security Language Initiative for Youth program. An HHS teacher initially recommended Rutter for the NSLI-Y program as a student of Chinese, but he wanted to tackle a language he had not studied and applied for the scholarship to study Arabic.

He spent six weeks in Marrakesh, a densely-packed city of about a million people located in the center of the country near the foothills of the Atlas Mountains. Rutter then was to fly to Washington to give a speech at the State Department, touting the program and its benefits to students.

“I felt really welcomed here,” Rutter said shortly before departing Morocco on July 31. “There is this notion that Africa is underdeveloped, and that’s a preconceived notion I had going into this trip and this experience, but I got here and living in Marrakesh is not that much different than living in a city in the United States.”

After the positive experience abroad, Rutter said he was looking forward to returning to the states and seeing his friends before he enters his final year at HHS and his last season playing soccer for the Hillers. He also is beginning the college search process and said he is looking to study international business and continue to pursue his interests in foreign languages and cultures.

He said he will miss a number of things about Morocco, including the food. He spent most of his summer feasting on tajine, a traditional dish of steamed vegetables and meat that is cooked in a pot.

“The food is really good,” Rutter said. “Everything is so fresh.” 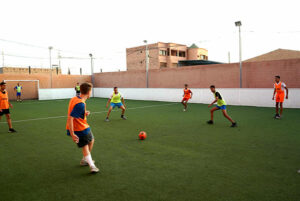