Coming off an appearance in the high school state Division 2 championship game in June, Hopkinton High School players Cole Glassburn, Drew Rancatore and Lawrence Tang helped Ashland Post 77 reach the Legion state final as well. Unfortunately for the locals, the result — even the score — was the same: a 2-0 shutout loss, this time to Lawrence.

“Winning a state title was a team goal all year that we set from the very beginning,” said Rancatore, a rising HHS senior who also played for Ashland Legion last year. “Coach [Jake] Obid kept us focused on each game while still encouraging the great overarching things he believed the team could accomplish, and that lifted our confidence in the aims of achieving that goal throughout the season. It was fulfilling to share that journey with teammates from rival towns and play a high level of baseball that made me a better player and reflected the direction Ashland Legion is headed in.”

The Zone 5 regular-season and tournament champion, Ashland opened the double-elimination tournament with a 6-3 victory over Shrewsbury in which Ashland scored four times with two outs in the sixth inning. Rancatore had one of the clutch hits in the frame.

Following a 2-1 loss to Sandwich, Ashland posted a 2-1 walkoff win over Somerset that featured Glassburn pitching seven innings and allowing just one run on five hits. That was followed by a 14-6 rout of Lawrence on July 30 that advanced Ashland to the tournament’s final day. In that win over Lawrence, Glassburn went 2-for-4 with an RBI and a run scored, and Rancatore had an RBI and a run scored.

After an off day due to rain, Ashland knocked off Sandwich 3-0 on Aug. 1 and earned a rematch vs. Lawrence in the final immediately afterward. The Ashland bats could only generate one hit, however, in a 2-0 loss that ended Ashland’s season at 21-5.

Milford opened the eight-team state tournament with a 2-1 victory over Quincy, walking off when McKenzie delivered an RBI single to cap a two-run seventh.

After a 4-0 loss to Lawrence, Milford bounced back with an 8-2 victory over Shrewsbury, the team it lost to in the Zone 4 tournament finals.

On July 30, Milford’s season came to an end with a 6-5 loss to Sandwich despite McKenzie’s 3-for-3, two-RBI performance. Milford finished with a record of 24-7. 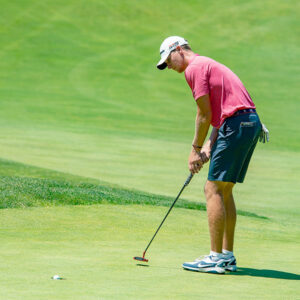 Hopkinton’s Jimmy Hervol sinks a putt during the final round of the 111th Massachusetts Amateur Championship on July 20 at The Country Club in Brookline.
PHOTO/DAVID COLT/MASS GOLF

Hervol, who recently completed his stellar collegiate career at UConn, fell to Swampscott’s Steven DiLisio, a rising senior at Duke, in the 36-hole championship, 3&2.

Hervol won four matches to reach the final, including a semifinal victory over Brett Krekorian that he won on the final hole.

Hervol then competed in the Porter Cup, one of the country’s most prestigious amateur events, at Niagara Falls Country Club in Lewiston, New York, in late July, finishing in a tie for 11th, seven strokes behind winner Aiden Didone at 277. Hervol was in third place, two strokes off the lead, after shooting 69 and 65 in the first two rounds, but he posted a 74 in the third round before closed with a 69 in the final round to finish at 277.

Hervol indicated he plans to turn professional this fall.