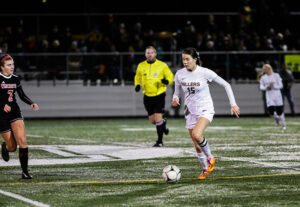 Sydney MacDonald, who will play at Vassar College in the fall, led the Hillers to the state championship game last fall.
PHOTO/TRICIA LACASCIA PHOTOGRAPHY

Hopkinton High School graduate Sydney MacDonald capped off her Hillers soccer career with a strong season both on the pitch and in the classroom, last month earning the Scholar All-American Award presented by the United Soccer Coaches Association.

MacDonald dominated on the field, earning three straight team MVP awards and Tri-Valley All-Star honors. She was a first-team all-state selection and helped Hopkinton capture its first ever Division 2 South sectional title last fall. The Hillers advanced all the way to the state title game.

In the classroom, the Vassar-bound MacDonald earned a 4.28 GPA and was a member of the National Honor Society.

“It’s not easy being a student athlete, to balance everything,” said Wayne Sygrove, Hopkinton’s coach last fall, “but from the grades she got, from the way the teachers spoke about her, she definitely made sure she took care of business off the field first, which allowed her to do her thing on the field.”

Sygrove described MacDonald as a “natural leader” and someone the rest of the team looked up to. She was a huge help to the first-year coach (who has since moved out of state).

“All the players on the team respected her, the younger players really looked up to her,” Sygrove said. “Whenever she had anything to say, everybody listened and valued her opinions.”

MacDonald also led by example, playing the center midfield position and anchoring the Hillers on both ends of the field. Sygrove said she was very strong defensively and consistently able to win the ball and and be in the right place at the right time. When the situation called for it, she also was willing to go upfield and support Hopkinton’s attack.

“Nobody worked harder on the field than she did,” Sygrove said.

MacDonald received a letter from the Scholar All-America committee in late June, letting her know she had been chosen. She was sent two certificates, one for her and one to display at the school, and is invited to attend the All-America ceremony next January at the Baltimore Convention Center in Maryland.

A total of 104 players nationwide received Scholar All-American recognition, including 40 boys and 64 girls. MacDonald is one of only two girls selected from Massachusetts.

MacDonald also found time for volunteer work, participating in the Live4Evan Run + Fun event, a Hopkinton community event raising money in support of families dealing with congenital heart defects. She helped sign up runners, hand out water and clean up after the event, Sygrove said.

She helped pass along her love of soccer to younger athletes by organizing events with Hopkinton Youth Soccer, including the Future Hillers Camp and the Columbus Day 3×3 Tournament.