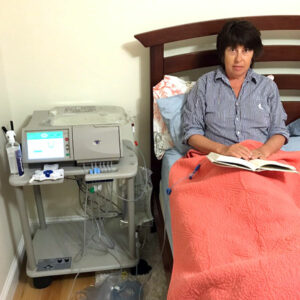 Susan Graham receives dialysis treatment every night at her Hopkinton home while she hopes to eventually receive a new kidney.

Susan Graham has a simple request: Please save her life.

The 57-year-old has known for many years that this day was coming, when her kidneys would fail and she would be on the list for a transplant — with about 100,000 other Americans.

Graham, who has lived in Hopkinton for the past 26 years, found out in her 20s that she had polycystic kidney disease. She was tested (blood work and an ultrasound) after learning that her mother had been diagnosed with the same issue.
“It’s hereditary, if one of your parents has it you have a 50 percent chance of getting it,” Graham explained. “What it does is it causes cysts to grow on your kidneys, and those cysts eventually grow so large and there are so many of them that your kidneys stop functioning.

“So I’ve known I’ve had this for a long time, and my kidney function has declined to the point where I was put on the kidney transplant waiting list, which I have been on for 3 1/2 years.”

As she slowly but steadily declined to the point where her kidneys now operate at about 5 percent of their capacity‚ Graham sought out relatives and friends to see if someone could donate one of theirs (most people can get along fine with just one of their two kidneys). No one who was tested matched her blood type — even her sister, who does not have the disease. It doesn’t help that most of her relatives are in England, where she was born and spent her first 8 years before moving to Toronto.

So now she waits for either a living donor or a cadaver kidney, for which the average wait is five to six years. Meanwhile, she is on daily — actually nightly would be more accurate — dialysis at home. She had a catheter surgically placed in her abdomen that she connects to the dialysis machine each evening. During the night, the machine sends fluid into her peritoneal cavity (which covers the abdominal organs). Via osmosis the fluid draws waste out of her blood through the peritoneal lining. The waste is removed and clean fluid is sent back into her body. This process occurs six times per night.

While Graham sometimes is able to sleep through the process, she often wakes up due to the machine beeping with an error message or from pain caused during the draining when the suction causes the catheter to stick to her internal organs.

And yet she generally considers herself among the fortunate ones.

“I feel like I’m luckier than most people because I’m able to do this type of dialysis at home,” she said. “A lot of people have to go to dialysis centers, and that is very grueling, very difficult on the body. People have to do that three or four times a week, and on their off days they’re usually in bed. It’s very, very tiring. So I’m one of the lucky ones that’s able to do it at home.”

Graham also feels fortunate to have learned early on that she had the disease. While there is no cure, those afflicted can help their cause by staying healthy, especially controlling their blood pressure.

“There isn’t anything that you can do to stop the progression of the disease,” she said. “There’s no medicine, there’s no cure. Of course, if you eat properly and exercise — like everyone is supposed to do — that certainly helps as far as overall general health, because your kidneys control your blood pressure. So as your kidneys fail you can get increased blood pressure, which leads to strokes and other illnesses. So if you can eat properly and exercise to maintain a good blood pressure, that’s really the only thing you can do. But there’s nothing to stop the actual disease.”

Added Graham: “With this particular disease, the good thing about it is if you can control your blood pressure usually you can feel pretty good and have a pretty normal life. You feel good, other than being a little bit tired. Actually, this disease is more common than a lot of people realize, because until your kidneys have declined to about 10 percent of their function you don’t really get any symptoms.”

Graham said she has “an active, normal life,” aside from the fact that she has to schedule everything around the dialysis, which takes about 10 hours including preparation and follow-up work — each morning she has to track and report to her dialysis center her blood pressure, weight and temperature. Additionally, she only has about 20 feet of tubing, so she can’t stray far from the machine while she is connected. 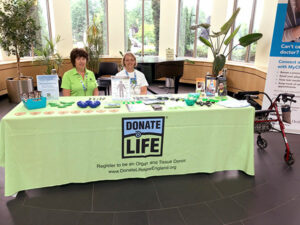 Susan Graham (left) seeks to promote education and awareness of organ donation in an effort to help herself as well as the thousands of others who also need a life-saving transplant.

Meanwhile, she is energized by championing the cause of organ donation. Certainly saving herself is foremost on her mind, but she also hopes to help make a difference for the approximately 125,000 others who are similarly in need of an organ transplant.
Graham does volunteer work for New England Donor Services, the organization that coordinates organ transplants in Massachusetts, going out into the community and talking to people about organ donation.

“It’s a matter of educating people,” she said. “About half the people are already registered, which is great. The other half aren’t interested in organ donation, and it’s usually because they’ve been given false information. The biggest objection I hear from people is that, ‘If I get into a car accident or I go to the hospital if I’m sick, the doctors and nurses will not try as hard to save my life if I’m an organ donor,’ which is completely false. I don’t know why people believe that, because nobody — no doctor, no nurse, no EMT — wants anybody to pass away on their watch. They do everything they can to save your life. And the decision as to who is going to be an organ donor is not made by the doctors and nurses at the hospital you go to anyway. It’s administered by New England Donor Services. So that’s absolutely false, but people think that.

“The other reason they don’t want to register is they say they’re too old. Now, for bone marrow I believe they don’t let people donate after the age of 60, and I don’t know why. But for organ donation there is no age limit. There was actually a lady in Scotland who was over 100 who donated her corneas to a blind person. A lot people say, ‘Oh, you don’t want my organs, they’re really old,’ or, ‘I have really poor eyesight, you don’t want my eyes.’ Well, to a blind person, poor eyesight is great. They’d love to have any eyesight. So nobody should count themselves out from being an organ donor for any reason.

“I encourage people to register, because if you can become a donor, that’s great. But if you pass away and you haven’t registered we lose that opportunity to save a person’s life. And one donor can save up to eight people with a heart, lungs, two kidneys, liver — it’s organ and tissue, also, so skin for burn victims, corneas for blind people.”

She also seeks to educate people that not only can they register to donate their organs upon their death, as many already do, a kidney is something that can be donated by a living person. We are born with two kidneys, and if one is removed the other enlarges on its own and handles the job itself.

Someone willing to donate a kidney would go through stringent testing — including psychological analysis — to minimize the chance that there would be future health issues.
And, Graham noted, “If anything did happen to their remaining kidney, because they had been a kidney donor they would shoot right to the top of the list for a kidney transplant. Donors are really well taken care of.”

That includes the financial side of the process.

“There’s absolutely no cost to a donor,” Graham said. “If somebody came forward to volunteer a kidney to me, my insurance company will pay for all of their testing, all of their surgery and all of their followup care.”

Graham is registered at two transplant centers in Massachusetts — UMass Medical Center in Worcester (508-334-1269) and Mass. General Hospital in Boston (877-644-2860). She encourages anyone with interest to reach out to one of those facilities, keeping in mind that they always can decide to back out at any time.

“I think if anyone would consider it, if they would just make the phone call and go into UMass or Mass. General, talk to the people there, go armed with all of your questions,” she said, “and at any point in the process if you’re not comfortable you can just say, ‘I don’t want to do this.’ But if people could just consider it it would be phenomenal. It would save my life, because I have the dialysis treatment right now, but you can only survive on that treatment for an average of six years. I’m 57 right now. I’m not going to be able to get to 80, 85, 90 without a kidney transplant. I can’t survive on dialysis for that long. And unfortunately there’s over 120,000 people in this country just like me.”

Added Graham: “For anybody to consider donating a kidney and becoming an organ donor would mean the world to me. They would save my life.”

← HHS soccer star MacDonald named Scholar All-American Letter to the editor: By any other name … →