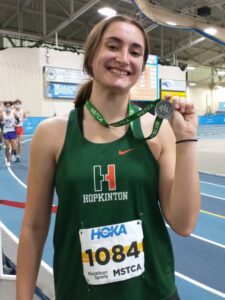 Kate Powers shows off one of her medals from Monday’s meet. PHOTO/HHS ATHLETICS

Hopkinton High School senior Kate Powers set a school record with a toss of 45 feet, 6 inches in the weight throw and won the event by more than 3 feet at Monday’s Massachusetts State Track Coaches Association Holiday Challenge at the Reggie Lewis Track & Athletic Center in Boston.

Powers also took second place in the shot put with a personal-best heave of 36-10.

Sean Golembiewski continued his record-setting season, running the 55-meter hurdles in a time of 7.66 seconds, breaking the record he set earlier this month.

Also at Monday’s meet, Kate Callery ran a personal-best time of 12 minutes, 6.51 seconds in the 2 mile, Elyse Srodawa took second in the freshman mile in 5:54.90, Bridgid Cavanaugh was seventh in the same event in 6:00.47, and Shelby Jones competed in the pentathlon, leaping 4-4 in the high jump and running 10.75 seconds in the hurdles in her first attempt at both events. …

Many Hillers teams continue to be on pause due to the surge in COVID-19 cases. Among the cancellations was the girls basketball team’s inaugural Mary Korbey Invitational Tournaments, which had been scheduled for this week. The girls have yet to play a game this season.