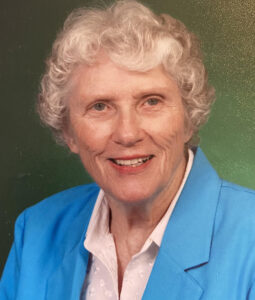 Catherine Ann (Kitty) O’Connell, 96, formerly of Hopkinton, was taken by the hand of Jesus to greet her family in heaven on Dec. 21. She passed away peacefully after a faith-filled life of humility and kindness to all who were fortunate enough to cross her path. She was raised and lived in Hopkinton for her first 39 years in the company of many family members and friends. She married William F. (Bill) O’Connell in 1948 at St. John the Evangelist Church, and they were happily married for 54 years until Bill‘s passing in 2002. She was a full-time mom, raising five boys and one daughter.

Visitation will be held Wednesday, Jan. 5, from 9-10:30 a.m. in the Callanan Cronin Funeral Home, 34 Church Street, Hopkinton. A funeral Mass will take place in St. John the Evangelist Church at 11 a.m with Father Cannon as celebrant. Burial will follow in St. John’s Cemetery.

Memorial donations may be made to St. John the Evangelist Church, 20 Church Street, Hopkinton, MA 01748 or stjohnhopkinton.com.