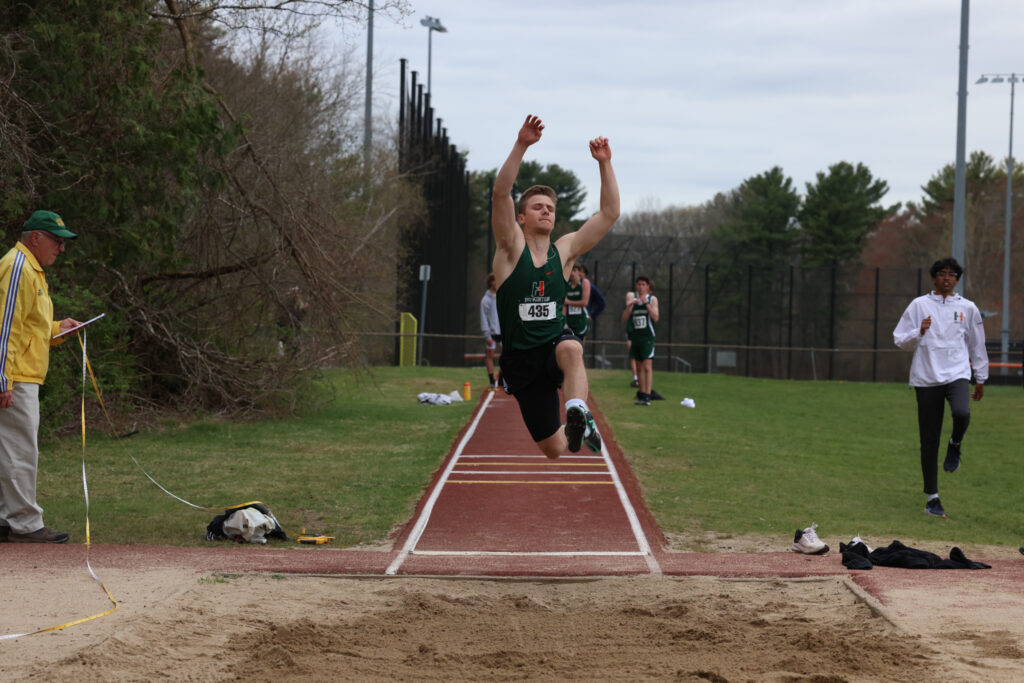 The Hopkinton High School boys and girls track and field teams routed Westwood on Tuesday, with both improving to 4-0 on the season.

The girls won 100-35, led by Kate Powers and Kiki Fossbender, who each won two events. Fossbender, who recently committed to play basketball at Trinity College, won the long jump and 400 meters and was second in the 100. Powers won the discus and shot put and took third in the 200.

The HHS girls and boys lacrosse teams posted victories over Bellingham on Tuesday.

While the girls cruised to an 18-1 rout, the boys pulled out a 10-9 road victory. Logan DelPonte recorded a hat trick and two assists, and he scored the game-winning goal.

Last Wednesday, the girls fell to Dover-Sherborn, 13-10. Dacey and Arena each scored four goals, while Sinead Herr recorded a goal and three assists.

Boys tennis picked up a 5-0 victory over Dedham on Tuesday, winning all five matches in straight sets. Adam Glace, Pranav Kapur and Barry Wang won singles matches. Andrew Palacios and Ilian Glace won at first doubles, while Srikar Ravi and Dan D’Alleva won at second doubles. It was a nice bounce back after a 5-0 loss to Dover-Sherborn on Thursday.

HHS softball had a late rally against Dedham to close an 11-run deficit to three, but the Hillers came up short in a 13-10 loss on Monday. Holly Paharik hit a grand slam and Ashley Callery added a home run in the seventh inning.

Last Thursday, the Hillers exploded for a 31-5 victory over Dover-Sherborn.

One day earlier, Charlotte Cann struck out 11 batters in a 21-4 victory over Ashland. Leading the offense was Paharik, who went 4-for-5 with five RBI, and Callery, who went 3-for-4 with two RBI. …

Baseball dropped a 4-3 decision to Dedham on Monday. Three days earlier, the Hillers enjoyed a memorable experience by playing at Fenway Park, although they were blanked, 2-0, by a strong Medfield team.

Last Thursday, John Wauters (10 strikeouts in six innings) and relieve Mike Burney led the way in a 5-4 victory over Dover-Sherborn that took eight innings to decide.

Last Wednesday, the Hillers rallied from a 9-0 deficit but fell one run short in a 13-12 loss to Ashland.