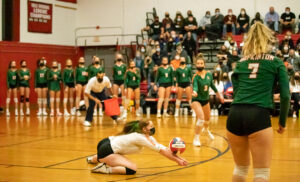 Hopkinton, the third seed, advances to this weekend’s state championship match (details TBA) to play top-seeded Westborough, which swept Melrose on Tuesday night in the other semifinal. UPDATE, Wednesday, 10 p.m.: The state final is Saturday at 4 p.m. at Tewksbury High School.

The Hillers took an early advantage, winning the first game 25-18. King Philip rallied from a late three-point deficit to win the second game, 25-23.

Hopkinton then took charge, jumping out to an 11-1 lead and cruising to a 25-8 win to regain control of the match. The highlight came with the Hillers up 16-4, as King Philip blocked a Hopkinton spike attempt and the ball deflected off a Hopkinton player and toward the sideline. Cathryn Leighton dove to her right and was able to send the ball over to the King Philip side with her right hand. Mikayla Grady then blocked the ensuing KP spike attempts for the HHS point and a commanding 17-4 lead.

The final game was closer, but the Hillers prevailed 25-21 before erupting into a celebration.