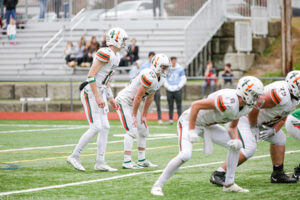 Quarterback Robby Bernardin (left) and running back Cam Mulvaney have the Hillers on a two-game winning streak heading into their Thanksgiving Day showdown vs. undefeated Ashland.
PHOTO TRICIA LACASCIA PHOTOGRAPHY

The Hopkinton High School football team put its resilient nature on display after being eliminated from the postseason, earning back-to-back wins to build momentum heading into the final game of the season against Ashland.

The Hillers are 4-6 heading into the Thanksgiving Day showdown, with a relatively new roster battling a gauntlet of a schedule.

“We knew we were going to have some inexperience and it showed at times,” first-year head coach Dan MacLean said. “The schedule we played is one of the toughest I have ever been a part of. It was brutal and we were in almost every game this year, we had a chance to win nearly every time.”

The one game MacLean said he wished he could have back is the postseason loss to Plymouth South that brought the Hillers’ tournament run to an end. But Hopkinton rebounded to knock off Milford the following week, beating Milford in the Hillers’ only home game under the lights. The team followed that up with a win over North Quincy.

“I was super proud of the kids,” MacLean said. “When you lose a playoff game, it’s tough to get back. I didn’t have to do much though, the kids did it all.”

Senior Robby Bernardin stepped into the starting quarterback role this fall after two years as the backup. He threw for more than 1,800 yards through the first 10 games and MacLean praised his signal caller for his leadership ability.

“I was really excited to finally be in this role,” Bernardin said. “It’s been a lot of fun.”

Running back Cam Mulvaney has added over 800 rushing yards this fall behind a strong offensive line. David Quinones, Aidan Stewart, Aidan Morin, Reece Griffiths and Luke MacDonald have consistently opened up holes in front of Mulvaney.

“Our offensive line really came though,” MacLean said. “We were not sure about them going in and they have responded.”

“It’s been so much fun, this is by far the most fun football season I have been a part of,” MacDonald said. “Just the camaraderie on this team, people say ‘family,’ but I have truly felt like our team has been a family. Especially this senior year, everyone has stepped up.”

On the defensive side of the ball, Andrew Saporoschetz has totaled more than 120 tackles to lead the way.

“He has been a phenomenal football player this year on both sides of the ball,” MacLean said.

Max Lacascia, Zachary Levy and Cole Salyards have all been solid defensively, the coach added.

MacLean said he was proud of the fact that his team has been able to compete against strong opponents. In the season opener, Hopkinton had a chance to beat Wayland but could not punch it into the end zone to beat a team that ended up in the sectional semifinals. Hopkinton let a first-half lead slip away against perennial power Holliston and battled undefeated Ashland in a game that was tight into the second half.

The Hillers have weathered some tough road trips and finally turned the corner with a winning streak heading into Thanksgiving.

“I think the kids have played better than I thought,” MacLean said. “They have battled all season.”