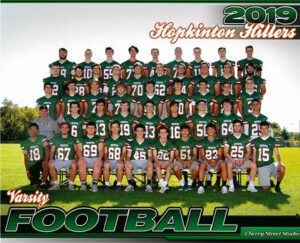 For the second straight year, the Hopkinton High School football team will be playing a Thanksgiving Day rematch against Ashland, and the Hillers are hoping recent history repeats.

A season ago, Hopkinton bounced back from a loss earlier in the season and won on Turkey Day to come into this year’s tilt with a 52-38-5 record in one of the longest-running holiday rivalries in the state. The dynamic of the rivalry has been different under the new playoff format, which has led to Hopkinton and Ashland playing each other before Thanksgiving during the regular season, but Hillers coach Dan MacLean said this is still a special game.

“I am different than most people who say Thanksgiving is not the same because you have to play them twice,” he said. “I think this rivalry is phenomenal. Being part of it the last few years as the defensive coordinator, when Hopkinton and Ashland get together, both teams want to win and it’s going to be a great football game.”

Two of the last four years, the game has come down to the final play of the game. Last season the two teams were locked up in a tight game before the Hillers pulled away in the fourth quarter.

“The kids love it,” MacLean said. “It’s the town next door and it’s such a special rivalry.”

MacLean said he has not seen any dip in the quality of play since the Thanksgiving game became a rematch.

“This year it was a battle and now we get another shot at them,” he said. “You’ve seen them once, so preparing for them might be a little easier, but it ramps up when you get to Thanksgiving. Seeing the people there, it’s always a big crowd and it’s going to be a great football game.”

The game is particularly important for the seniors on both sides. This fall, Hopkinton will get to play the year’s final game at home.

“This is a big one,” Hillers senior lineman Luke MacDonald said, noting the fact that some players on both sides played together as kids with the Hopkinton-Ashland Fighting Irish. “This is a game we are all looking forward to.”

“The past few years it’s been a really good game,” added senior quarterback Robby Bernardin “There are always a ton of fans and a big crowd. I know I am going to have a lot of family there.”

MacDonald said the fact that his high school football career is coming to an end is already staring to set in. He added that while both teams have a great deal of respect for one another, the rivalry is intense.

The Hillers come into the game riding the high tide of a two-game winning streak, the first time winning back-to-back games all year. Winning a third in a row — especially against an Ashland team that heads into the game undefeated — would be the perfect end to the season, but knowing it’s the last time they will don the green and orange makes the holiday tradition bittersweet.

“It’s going to be really special and it’s going to be sad no matter the outcome,” Bernardin said. “I am excited to play four more quarters with my teammates and end the season on a high note.”