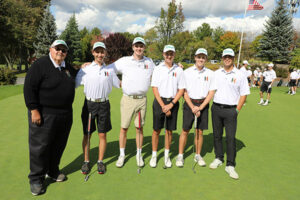 Dick Bliss (at left, alongside the 2019 seniors) is stepping down after 40 years leading the golf team at Hopkinton High School.
PHOTO/JOHN CARDILLO

Longtime Hopkinton High School golf coach Dick Bliss announced his retirement after 40 years of leading a program that has grown into one of the most successful in the state, capping off a career that includes four state championships and five Division 1 collegiate players.

“It’s been a great run,” Bliss said. “I have no regrets. Looking back to where it started in 1979, up to 2019, there are so many kids whose lives I have been a part of. Some of them have turned pro, and a lot of them are still golfing.”

Bliss made the announcement at the team banquet earlier this month. The program he helped grow into a powerhouse began humbly in his first year. Back then, Hopkinton played at Saddle Hill Country Club, before it became Hopkinton Country Club. While this year’s team has nearly 30 players and 22 golfers set to come back next fall, that first team barely had enough to compete.

“We had eight players, it wasn’t a thing to do to play golf in Hopkinton,” he said. “During the ’80s and halfway through the ’90s, we were just trying to get enough people to play. We had tough times getting enough people.”

Golf was a spring sport at that time and had to compete with baseball for players. But Bliss put a lot into the program. During his tenure as athletic director in the early ’90s, he made sure the golf team had an assistant coach.

The the demographics of the town began to chance. EMC came in and, with it, an influx of residents from a high socioeconomic class more predisposed to play golf. Saddle Hill became Hopkinton Country Club, and the numbers for the program started to grow. Hopkinton High School went from graduating classes of fewer than 100 students to graduating more than 300 kids per class.

2003 was a breakthrough year for the program. Future PGA Tour star and major champion Keegan Bradley joined a team that included John Curran, who would go on to Vanderbilt and a professional career of his own, and Kim Donovan, who played golf at Duke.

The Hillers advanced to the state title. Bradley won the individual crown with a 3-under-par 69. Curran shot 70 and Donovan 71. Hopkinton’s team total was 2-under par.

“That is a record that will never be broken,” Bliss said. “I think we won by 45 shots.”

Even with Bradley leaving the next year, Curran and Donovan led the Hillers to a second straight state championship in 2004.

Hopkinton amassed 11 Tri-Valley League titles under Bliss and just missed out on the state tournament three times during the career of Jimmy Hervol, another professional tutored by Bliss who is joining the pro ranks after an All-American career at UConn.

Bliss finished his career in fine fashion, losing just once in a league meet over his final three years en route to a trio of TVL titles and back-to-back state crowns in 2017 and 2018 before a top-five finish this fall.

He was able to claim one more D1 talent as well, with Matt Epstein slated to play at William & Mary next year.

Bliss, who also coached basketball for many years, said he knew this would be his final year. Leading a team is not a part-time job for him. He follows his players in the offseason and checks in on the tournaments they compete in between suiting up for the Hillers. He said he plans to continue to do that next year, but in an informal capacity. Bliss said he plans to stay close to the program he built and make sure it continues to meet the high bar set over the past two decades.

“It’s always been a labor of love,” he said. “I love doing it, but it’s time to let somebody come in and hopefully help the winning tradition we have.”