Hopkinton High School junior Olivia Jones successfully defended her title in the Eastern Mass. Division 3 championship meet on Nov. 9 at Wrentham Developmental Center. Jones won in a time of 18 minutes, 36.79 seconds for the challenging 5K course, a good 25 seconds ahead of her nearest competitor.

Jones went on to finish fourth at the Division 1 All-State meet on Nov. 16. It marked the best-ever finish by a Hopkinton runner, regardless of division.

“Olivia always seems to find an extra gear when she gets to championship season,” HHS coach Jean Cann said. “At the D3 meet she went in as defending champ, so she knew she belonged at least near the front. Once she took off, I was confident she would hold the lead. She looked comfortable and strong. At the All-State championship, she set a goal of top 10 and crushed that with a fourth-place finish.”

At the Division 1 All-State meet the boys finished a respectable 15th, with Alex Brown’s 17th-place individual finish the highlight.

Volleyball bows out in sectional final

The HHS volleyball team appeared poised to knock off top-seeded Needham in the Central/West sectional final on Nov. 9. Hopkinton captured the first two sets, 25-21 and 25-19. However, undefeated Needham stormed back to win the next three sets, 25-19, 25-22 and 15-8.

The loss ended a memorable season for the Hillers at 20-1.

“This team went farther, played harder, and did more than anyone expected them to,” HHS coach Margie Grabmeier told the media after the loss. “Credit to Needham. They were well-coached and came back from a 2-0 deficit. That’s why it hurts. But my girls did a great job and I’m just really proud of them.” 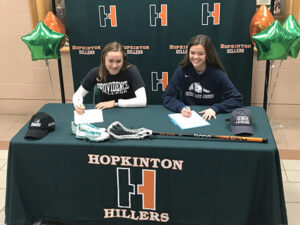 Delaney Mick was one of three Hillers who signed a National Letter of Intent (NLI) this month, committing to run track at Providence College next year.

“Delaney is a hard-worker who has really thrived working with Coach [Brian] Prescott in the weight room and on the track,” HHS coach Jean Cann said. “She has a positive attitude and is willing to run any event the team needs her in. She really shines in the relays where teamwork is essential. Providence is lucky to have her.”

Other Hillers making their commitments official were Olivia O’Connor, who will play lacrosse at the University of New Hampshire, and Matt Epstein, who will play golf at William & Mary.

Sophie Student, a Hopkinton resident who is a senior at St. Mark’s School in Southborough, signed a National Letter of Intent to play lacrosse at Virginia Tech.

The 2019 Independent School League Most Valuable Player, Student is a three-time All-ISL selection. She helped lead St. Mark’s to its fourth league championship in five years this past spring. The co-captain tallied 102 draws, 61 goals, 21 assists and 28 caused turnovers.

“Sophie is a phenomenal lacrosse player and athlete,” said St. Mark’s coach Channing Warner. “She is fast, smart and dynamic on the field. This year, amidst a powerful attacking group with many collegiate-level players, Sophie led the team in scoring, which speaks volumes to her talent level. She balances being a strong leader and a selfless teammate perfectly. We are so excited we get one more year with her.”

The Wildcats beat Trumbull’s Christian Heritage School, 1-0, in the final. Walsh, a midfielder/striker, picked up an assist in the quarterfinals, a 3-1 victory over Hamden Hall.

Vermont Academy finished the regular season 12-5-2 and was seeded second in the NEPSAC tournament. Walsh scored one goal on the season, coming in a 2-1 victory over Cushing Academy on Oct. 26.

Walsh also is an ice hockey player for the Wildcats.

← Bliss retires after 4 decades as HHS golf coach Letter to the Editor: Main Street gets new vote it deserves →