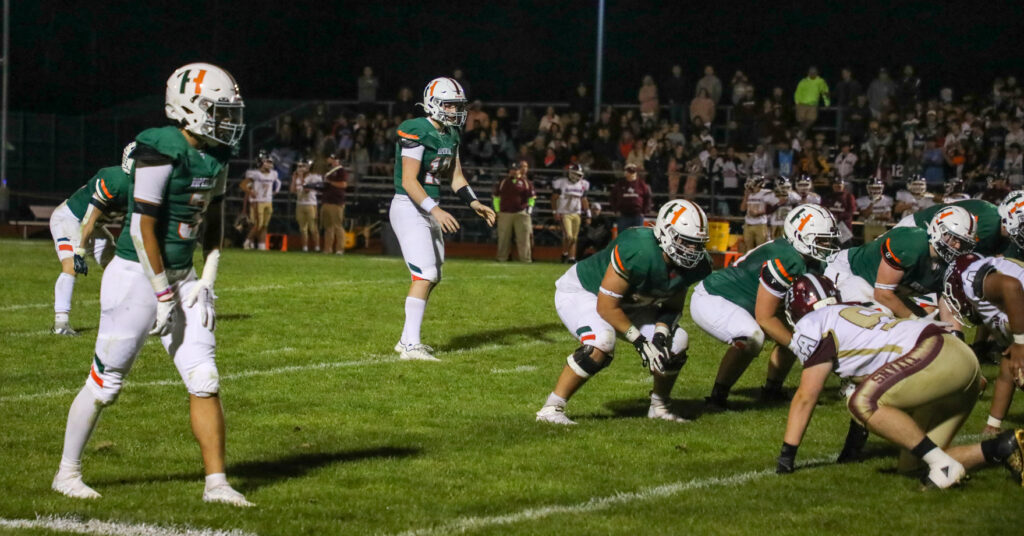 Hopkinton High School football coach Mark Sanborn said the feeling was palpable after last season. No one coming back to the program this fall was pleased with the team’s 3-8 record in 2021. So the incoming senior class decided to do whatever it took to prevent a repeat performance this season.

“We knew that we have a great group of returning seniors,” Sanborn said. “It’s not a huge class, but they all got substantial playing experience last year against a lot of really good football teams.”

The coach recognized that the 2021 season was a difficult one for his team.

“We took our punches last year,” he said. “But we had a lot of good experience against those teams and our guys made a commitment to put the work in and come back strong this season. They have a chip on their shoulder, and they are playing that way this year.”

That was evident in the team’s first three games — a 16-6 season-opening win at Wayland, an exciting 22-18 victory over visiting Algonquin and, this past Saturday, a 39-13 rout of host Westborough.

The Hillers are led by four captains, and the team held off on voting for them until the first week of the season. But Sanborn said the quartet of Braden Hicks, Kavin Prasanna, Robert Litscher and Justin Sokol stood out.

“They have been great in the offseason,” Sanborn said of his captains. “Our senior class on the whole has been fantastic, they’ve been leading our program the right way on and off the field, in everything we have done. We are going to go as far as they take us.”

Hopkinton features a veteran offensive line, anchored by Sokol, a 6-foot, 250-pound senior. He and the rest of the line is charged with protecting the veteran quarterback Litscher and giving him time to make plays. Wide receiver Seamus Murphy, another senior and a returning Tri-Valley League All-Star, is one of Litscher’s top targets.

“I think we have one of the best quarterback-wide receiver combos in the entire Tri-Valley League,” Sanborn said.

Prasanna anchors the defense as a starting inside linebacker. Brendan McGowan, a senior and returning league All-Star, sees time on the lines. Several additional players are back this fall after earning significant experience a year ago, including junior wide receiver and linebacker Charlie Petruney, senior running back Colby Lavelanet, and senior wideouts and defensive backs Andrew Budden and Paul Litscher.

“We have a lot of experience back this season,” Sanborn said. “We have guys who have varsity experience on all sides of the ball.”

The second-year coach characterizes his team’s ability as having “a little bit of everything,” including speed, size and skill players who can catch and run the football. The challenge through the season will be continuing to develop depth through junior and sophomore classes that Sanborn said are “working their butts off.”

Still, the experience is what the coach labeled as his team’s greatest strength.

“We went through a lot last year and I told them before the season that the fact that every single senior returned showed me something about their commitment,” Sanborn said. “They are not complacent, they want to get back after it and prove how good they can be.”