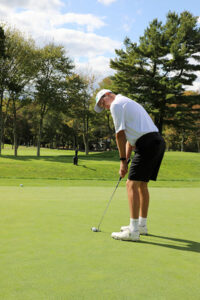 Senior Matt Epstein was named team MVP for a fourth consecutive season after helping the Hillers to a fourth-place finish at the Division 2 state tournament.
PHOTO/JOHN CARDILLO

The Hopkinton High School golf team finished the season with a fourth-place finish at the Division 2 state tournament, keeping the Hillers from a third straight state championship but capping off a stellar run.

“Looking back on it, regardless of what happened [at the state tournament], I am very proud of the four years of the teams’ accomplishments,” said Matt Epstein, the Hillers’ captain and four-time team MVP.

Hopkinton posted a 62-8 record in dual meet competition over the past four years. This season Hopkinton finished 15-1 in the Tri-Valley League, winning a share of the league title. Epstein captured the sectional championship with a 73 and helped the Hillers to a second-place finish in that tournament at Easton Country Club.

“It was a terrific season,” said coach Dick Bliss. “Our top six players went to states and it’s quite a year when you have six players make the All-Star team.”

Epstein is heading to William & Mary next season to play college golf at the Division 1 level, and Dean also is eyeing playing golf at the collegiate level. Epstein finished the year averaging under par. In addition to being a four-year team MVP, he has served as team captain since he was a sophomore. Despite being frustrated by an 81 in the state tournament, well above his season average, Epstein said he was happy with his final high school campaign.

“I feel like I played to my potential for most of the year,” he said. “If I played my normal game at states I think we could have come out on top, which stings. But I was proud of the way I played this year.”

Bliss has said Epstein has the potential to join the pantheon of great Hopkinton golfers, a list that includes a major championship winner in Keegan Bradley and fellow PGA pro John Curran. Jimmy Hervol, probably the best golfer in UConn history and a soon-to-be pro himself, has served as a mentor for Epstein as he makes the transition to the college level.

“I would love to give it a shot, to turn pro,” Epstein said.

Meanwhile, the golf team will move on next season with another strong nucleus of players returning, including four players who earned a league all-star or honorable mention spot.

“Ryan Lundy should be one of the best players in the league,” Bliss said. “And Geoff and Jack are right there as well, plus Teddy is going to be a senior.”

In addition, Hopkinton had 12 freshman in the program this year and four other sophomores who could see more varsity time during their junior campaigns.

“We have quite a few kids returning,” Bliss said. “We lose six seniors and three of them were very important to our success this year, but we have a good team coming back next year.”

That group will have a few tough acts to follow.

“It’s been a great run over these last few years,” Bliss said. “We couldn’t ask for anything more. I’s been a tremendous run.”