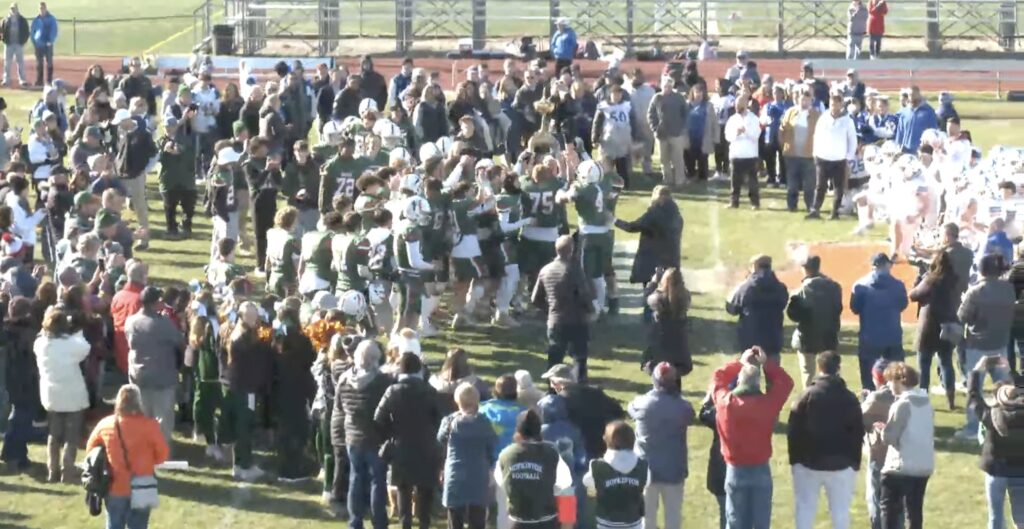 Seamus Murphy scored three touchdowns as the Hopkinton High School football team put the finishing touches on its impressive bounce-back season with a 32-14 victory over Ashland in the annual Thanksgiving Day rivalry game at Hughes Field.

Brendan McGowan, Justin Sokol and Devin Canty were key cogs on a Hopkinton defensive line that caused problems for Ashland all game, holding the Clockers scoreless in the second half.

“We came out slow in the first half, but in the second half we came out strong — 20-0,” HHS senior captain Braden Hicks stated. “Extremely bittersweet to end the season, but we battled and did everything we could to win. We are an extremely close group of seniors and I wouldn’t trade it for anything.”

Hopkinton opened the scoring with 2:32 left in the first quarter when Murphy took a handoff and raced to the left corner of the end zone from 7 yards out. It capped a drive of almost seven minutes and gave the hosts a 6-0 lead.

Ashland answered on its next possession, scoring on a 9-yard touchdown pass from Patrick Dwinnells to Cauan Amaral with 7:56 left in the second quarter. The PAT kick gave the Clockers a 7-6 lead.

Midway through the second quarter, the Hillers punted but recovered a fumble on the return at the Ashland 42. On fourth-and-2 from the 34, quarterback Robert Litscher faked a handoff and, just as he was about to get tackled, flung a pass to Cooper Fossbender on the right side for a first down. Then on fourth-and-5 from the 23, Litscher found Murphy streaking up the middle and hit him in stride for the go-ahead score 1:50 before halftime. A failed two-point conversion attempt left the score at 12-7.

With one second left in the half, Ashland stunned the home team with a 43-yard touchdown pass from Dwinnells to Jerry Judge down the left sideline. The PAT kick gave Ashland a 14-12 lead at the break.

The second half was all Hillers, starting right from the opening kickoff. The Clockers squibbed the kick up the middle. Eric Touzjian picked it up at the 30, made a quick fake and then burst right up the middle, racing past the Clockers return team for a 70-yard touchdown. The two-point conversion was ruled no good, leaving the Hillers with an 18-14 lead.

On Ashland’s ensuing possession, the Clockers fumbled the ball at their 32 and Hopkinton recovered with 9:48 left in the third. Ashland made things worse with a couple of penalties on the ensuing drive, which ended with another touchdown from Litscher to Murphy, this one just inside the pylon on the right side of the goal line. Avery Ravech booted the PAT for a 25-14 advantage.

Hopkinton kept up the pressure on Ashland’s next drive. With Canty closing in on the quarterback and forcing a rushed throw, Hicks intercepted the pass at the Hopkinton 45 and returned it to midfield.

The good times kept coming for Hopkinton, as Litscher unloaded a 49-yard bomb up the middle to Joey Carrazza, putting the ball at the Ashland 12. However, three plays later, a Litscher pass intended for his brother, Paul, was intercepted in the end zone by Connor Cowern.

It was a minor blip for the Hillers, as, early in the fourth quarter, Canty swarmed the quarterback and forced a fumble. Lineman Evan Van Beek recovered at the Ashland 39.

Four plays later, Carrazza took a handoff, ran left and raced into the end zone from 8 yards out. Ravech’s PAT made it 32-14, and it was all gravy after that.

McGowan had an interception with 4:47 left on a pass that was deflected by Sokol.

Defensive back Andrew Budden also had a fourth-quarter interception.