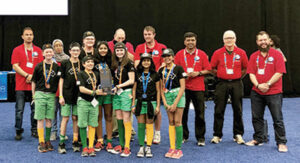 Members of the Hopkinton Middle School Cool Cats robotics team pose with their trophy and medals on stage at the VEX Robotics World Championship in Louisville, Kentucky, last month.

The team, 1715C — also known as the Cool Cats — submitted a math-based STEM research project video titled, “A Solution for Summer Drought in Cold Climates” (which can be viewed online here: youtube.com/watch?v=uiKdIKjQ5aA&t=37s).

“I am so proud of this group of young engineers,” coach Patricia Allen said. “They worked tirelessly to build and program their robot, organize and create their STEM video submission and on fundraising for this trip. This process sparks their creativity while developing real life skills like critical thinking, leadership, consensus building and presentation skills. They identified another eighth-grade student, Alex Tannenbaum, who could help them with the video editing process and used their resources wisely, namely the HCAM studio at the school and math teachers Mrs. Kouris and Mrs. Sherwill. They made their families, their school and the Town of Hopkinton proud. I really couldn’t be happier for them.”

Meanwhile, one week earlier, Hopkinton High School Hopkinetics program sent two teams to the high school worlds (also in Louisville). Team 2602A competed in the Research Division and finished slightly below .500 in direct competition against the world’s best. Team H, competing in the Engineering Division, had a winning record but just missed the playoffs.

Among the trip highlights, according to teacher Doug Scott, was Team H’s match against a deaf team from North Carolina in which the Hopkinton participants communicated via a notepad and simple signs, and all the Hopkinton students sharing a meal with a team from Tunisia.