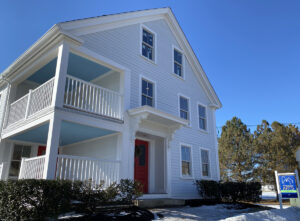 The newly redone farmhouse at the Hopkinton Center for the Arts will reopen soon. Almost every inch of the 100-year-old building has been renovated or updated. The original front door was preserved to help retain the building’s historic facade. PHOTO/JANE BIGDA

“You can’t go home again,” is an oft-quoted line from American novelist Thomas Wolfe. But the Hopkinton Center for the Arts is proving that adage wrong. It is literally going home again to the farmhouse where it began over two decades ago.

“We are thrilled to be reopening the completely redone farmhouse this month,” HCA Executive Director Kelly Grill said, noting private music lessons and ceramics classes for all ages will resume in the building beginning March 1.

The project began two years ago, when the HCA received grants from the Hopkinton Community Preservation Committee and Massachusetts Cultural Council to update the 100-year-old farmhouse. Originally owned by the Terry family, the building, plus a barn, outbuildings and surrounding farmland, were purchased by Hopkinton in 1996. Five local artists, who eventually became the Cultural Arts Alliance (CAA), petitioned Hopkinton to lease all the buildings plus 1.3 acres of land as an art center. The town agreed, and the CAA used the farmhouse, the only viable structure, for art exhibits, classes and events.

Through the next decades, the CAA became the HCA, and the barn, following two major construction projects, was restored and expanded as an art center with classrooms, the 200-seat Delbridge Family Performance Center and the Lotvin Family Gallery. An outdoor amphitheater also was created.

Thanks to an anonymous donation, the farmhouse’s first floor was renovated in 2016 as a ceramics studio. Private lesson rooms filled the second floor. 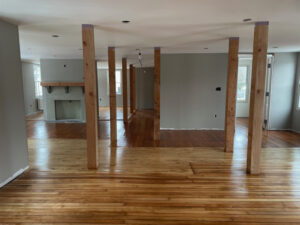 The interior of the farmhouse at the Hopkinton Center for the Arts has been redone. The building’s fireplace was one of the historic elements that was retained. PHOTO/HOPKINTON CENTER FOR THE ARTS

Grill said the latest work on the farmhouse, which due to COVID ran longer than anticipated and cost close to $1 million, was extensive. “Every inch of the house was redone,” said Grill. “Once we opened up the walls, we realized every structural beam in the house needed to be replaced. The structure also had to meet commercial codes. While we did all that, we are also very proud to retain as much of the building’s historic integrity as possible.”

Upstairs, the hardwood floors were refinished, and downstairs, the original front door was redone. “The door looks beautiful and helps the farmhouse preserve its character,” said Grill. She noted a new, accessible entrance was installed on the side of the building. 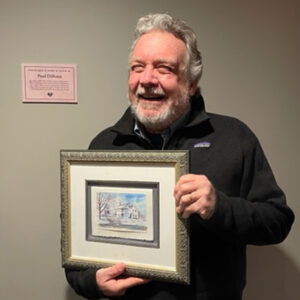 HCA facilities manager Paul DiBona recently was honored with a surprise party to thank him for all his work to keep everything running smoothly during the two-year renovation of the farmhouse. PHOTO/HOPKINTON CENTER FOR THE ARTS

Grill said the farmhouse will be open for tours once the occupancy permit is issued. A ribbon cutting ceremony also is planned.

“We are grateful to so many key people for helping with this project,” said Grill. The list includes Gorman Richardson Lewis Architects, Hopkinton’s Community Preservation Committee, the Massachusetts Cultural Council, the private lesson teachers for being so flexible during the construction, along with many others. “We are especially grateful to facilities manager Paul DiBona for keeping the ship afloat and the facility running during the work,” said Grill.

She and everyone involved with HCA also are thankful to the town. “Through the years we have been surprised at how the community has embraced us. In the last decade, our classes have increased from five to the current 220 while our student body has risen from 65 to over 2,000,” said Grill. “We are only able to do what we do because of the support of so many people in the community.”