An alert Hopkinton Police officer and the department’s K9, Titan, led to the rescue of an intoxicated man who was lost and suffering from hypothermia early Friday morning, according to police accounts.

An officer on patrol spotted the man’s abandoned car around 1:30 a.m. and tracked down the 28-year-old’s cell phone number.

“He was able to say he was lost in the woods,” Chief Joseph Bennett told the MetroWest Daily News. “He said he decided to go for a walk on a trail he was familiar with but got lost.” 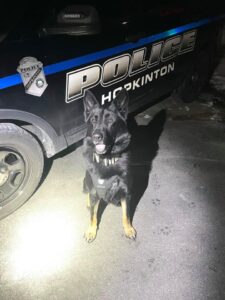 Officer Brian Sanchioni and Titan were called in to help, and the K9 worked efficiently in resolving the situation.

“Titan was quickly able to pick up the person’s scent and successfully tracked and located him within the woods where they had slipped down a slope and was laying on the ice of the lake [Whitehall] water,” the HPD wrote on Facebook. “The individual was suffering from obvious hypothermia as they had no shoes on in the 10-degree weather. They were transported to hospital for treatment.”

Bennett added that later on Friday he spoke to the man, who was very thankful for the police’s help in saving him.