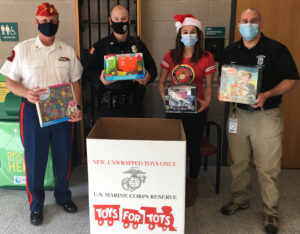 The U.S Marine Corps Reserves’ annual Toys For Tots program provides Christmas gifts to children of low-income families in Hopkinton and other communities in Middlesex and Essex counties.

The Marine Toys For Tots Foundation, the nonprofit charity founded by the Marine Corps in 1991, relies on community donations of money and toys to fulfill its three-month-long program.

Beginning in October and ending this Friday, Dec. 11, donated toys can be dropped off at designated drop-off locations. In Hopkinton, the Police Department serves as the primary location, easily accessible in the middle of town.

People can donate to the foundation’s program in one of four ways: through the nonprofit’s website (devens-ma.toysfortots.org), by mail, through crowdfunding or through the In Honor/In Memory program.

This year, only organizations, churches and nonprofit agencies could request toys up until the day before the collection ends. Due to the pandemic, Middlesex and Essex counties refused to manage toy requests for individual families in order to prevent a large number of people from entering the nonprofit’s warehouse.

American Legion Post 202 adjutant Michael Whalen, a veteran living in Hopkinton, has volunteered for the program for more than a decade. He learned about it as part of the Marine Corps.

“We get the boxes, we set them out, we collect them, we bring them to the distribution center, and people [sort] them according to age, gender, etc.,” Whalen said. “It’s something we look forward to every year.”

Whalen’s daughters also began volunteering with the program at a young age. They enjoy the atmosphere of collecting toys for what amounts to a large local operation, bringing them to the distribution center and putting them in piles.

“It just seemed natural to include them in this type of activity, which is what Christmas is all about: giving, the joy of helping those less fortunate than you,” Whalen said.

Per the foundation’s website, that sentiment aligns with its mission “to assist the U.S. Marine Corps in providing a tangible sign of hope to economically disadvantaged children at Christmas.”

Whalen considers the foundation a good charity, one heavily reliant on, and near-fully funded by, donations. The nonprofit puts over 97 percent of its donations toward buying toys, books and other items for financially disadvantaged children, less than 1 percent to overhead and the rest to fundraising.

The program distributed more than 70,000 toys to over 33,900 children in Middlesex and Essex counties last year.

Whalen described Hopkinton as a very generous community. His own box of toys at Hopkinton Police Station normally fills up between 15-20 times within the three-month period.

Whalen also said that participating in Toys for Tots helped him improve as a parent, an aspect he appreciates most about the program.

“I look at these toys, and people are spending money,” he said. “It’s not just inexpensive, go-through-the-motion toys. I’m talking about things like bicycles and that kind of stuff. … It just never ceases to amaze me the things that people donate.”

A thankful Whalen said every donation makes a substantial difference for the families receiving these gifts, especially the children.