Calling her daughter “bright, funny, loving, caring,” an emotional Calvina Strothers paid tribute to Mikayla Miller and called for a “full and transparent investigation” into the teenager’s death during Thursday’s rally that drew hundreds to the Town Common.

The investigation into Mikayla Miller’s death is being handled thoroughly and could take three months or more to finalize, Middlesex District Attorney Marian Ryan told the Hopkinton School Committee at Thursday’s meeting. “We are committed to determining how Mikayla’s very promising life came to an end,” she said.

Jonny Wolf’s soccer career at the University of New Hampshire has included numerous peaks and valleys, and the Hopkinton native is hoping for a strong finish after he recovers from an injury that has him sidelined.

Town Meeting is scheduled for tomorrow at 9 a.m. at the Hopkinton High School football field.

Photo of the Day: A makeshift memorial stands at the entrance to the trail off West Main Street where Mikayla Miller’s body was found on April 18. 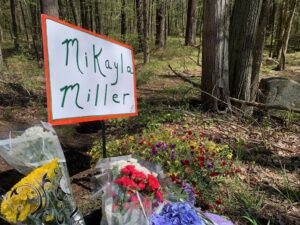