An alert Hopkinton Police officer and the department’s K9, Titan, led to the rescue of an intoxicated man who was lost and suffering from hypothermia early Friday morning in Hopkinton, according to police accounts.

With a major winter storm expected to reach Hopkinton early Monday morning, superintendent Carol Cavanaugh announced Sunday that the schools would switch to an early release schedule for Monday.

Photo of the Day: A Hopkinton Fire Department truck is stationed in front of Center School just after noon on Saturday, responding to a fire alarm that was triggered by smoke coming out of the boiler room. The problem was quickly rectified by facilities personnel. 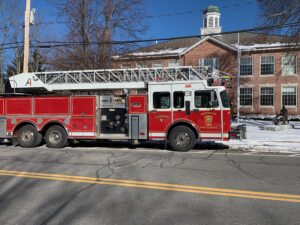