Independent Thoughts: An election like no other worth effort for town clerk 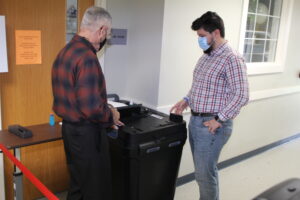 When town clerk Connor Degan scheduled his wedding for Oct. 3 he couldn’t have imagined what was in store. Not only is the entire world in the midst of a pandemic the likes of which has not been seen in over a century, Americans are participating in an election unlike any in the nation’s history.

Degan and assistant town clerk Lynn Kelly have been logging some long hours of late, primarily trying to keep up with a steady stream of early in-person and mail-in ballots.

“I get the joke quite often from my now-wife that she can only see me if she volunteers to work for election stuff,” Degan said. “It’s been a lot of early mornings and late nights to make sure that we can get all this stuff done and ensure that people’s votes are being counted, their votes are secure and that everything can be handled with the most integrity possible. So far we’ve been able to execute that, which has been fantastic.

“It’s worth the long hours to make sure people here in Hopkinton can get that.”

Degan said more than 5,700 residents requested mail-in ballots for the Nov. 3 election, which of course includes the highly charged race for president.

Much of Degan’s time is spent answering questions about early and absentee voting, and whether ballots have been received.

“A lot of people are asking can they still vote early in person if they have received their ballot in the mail but haven’t it mailed back yet,” he said. “The answer is yes, they can. It’s just that whichever one we receive first is the one that counts, and anything else that we receive after is rejected because the voter has already voted. They can’t have one cancel out the other, essentially.”

Early in-person voting is taking place at the Senior Center through this Friday. The remaining schedule is Wednesday and Thursday from 8 a.m.-5 p.m. and Friday from 8 a.m.-2 p.m.

Those with mail-in ballots can mail them back or place them in the drop box in front of Town Hall. The drop box is emptied multiple times per day, but Degan said people checking to see if their vote has been received should be patient. While Degan logs in the early in-person votes each evening, the mail-in ballots can get backed up.

“We have so much of it coming in, and there’s only two of us who can actually log it in, so we’re not getting to all of them the same day,” he said.

Those looking to see if their mail-in ballot has been received can check the Secretary of State’s website (sec.state.ma.us). But again, some patience may be required, as Degan indicated there are hundreds of ballots arriving every day.

“Some folks are worried that they can’t see their ballot yet. Well, the tracker is not real time, like when you’re tracking a package on UPS or FedEx,” he said. “It’s very much that it’s as we can get to it with the staffing we have. Then if I update something today on my side, the secretary’s office pulls all the data from our logs overnight, and it doesn’t populate until the next day. So even if we have it logged in as received it might not show up right away.” 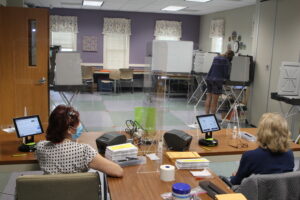 Election volunteers Linda Di Bona (left) and Colleen Charleston supervise as a voter fills out a ballot at the Senior Center. PHOTO/JOHN CARDILLO

Degan has received a boost from a loyal and experienced group of election volunteers in town, but the volunteers are limited in what they can access and duties they can perform.

“The election workers who are able to come in and help us out have made the task significantly more manageable,” Degan said. “We’re extremely lucky to have the election staff we do have, and it just continues to prove itself in situations like these.”

Degan said he has not seen any major issues with the Post Office, although he said some out-of-town ballots have taken longer to arrive. He noted that his office sorts the ballots by location so the Hopkinton Post Office doesn’t have to send them all to the sorting facility in Boston. The local ballots stay here and often arrive at residents’ homes the next day.

Looking ahead to Election Day, Degan said the counting will not end that night. He noted there’s been a change to the rule regarding mail-in ballots — they must be postmarked by Election Day and received by Nov. 6 — and there are overseas mail-ins and provisional ballots (where there’s an issue that needs to be resolved).

“Once those are all checked and we’ve hit our deadline to certify the election then we’ll be able to kind of breathe easily a little bit,” he said. “But that could be probably a couple of weeks.”

In case you are wondering, as of last week Degan said he had not decided how he was going to vote.

“In the primary I voted early in-person,” he said. “For this one I haven’t decided yet if I’m going to vote early or vote on Election Day. I haven’t voted through the mail since I was in college.

“I’ve voted through all the different methods now so I can at least attest that all of them are secure and I’ve always had my voted counted.”