Last year, the Hopkinton Independent started partnering with Baypath Animal Society to promote an adoptable animal in each issue.

Recently, the organization promoted a pair of pit bulls, which prompted some back-and-forth between residents via letters to the editor.

On one side are people who claim pit bulls are more aggressive and dangerous than other breeds. On the other side are those who insist any dog’s aggressiveness is due to how they are raised, not their breed.

I checked in with Elizabeth Jefferis, Baypath’s executive director, as well as Beth MacLeod, a veteran dog trainer who serves as the organization’s director of training and behavior.

“I’ve been in animal welfare for 15 years,” said Jefferis. “To a lot of us, what is a breed anymore? A lot of these animals are mixed. You just can’t generalize. What we see is predominantly mixes, and you’ve got to deal with the dog as an individual.

“You take in the history that you know. A lot of times we don’t get history. We have a process. We do behavior evaluations. We monitor the animal. It’s constantly fluid, the plan with any animal, watching how they react in a stressful situation, in a shelter. We also have an excellent foster program to get us more information if possible. But we deal with the dogs as individuals.”

Added MacLeod: “It’s all about how the dog is trained. It doesn’t mean there’s not a genetic component, but that’s true with every single breed. In all honesty, I have a very robust practice where I am handling aggressive and reactive dogs, and maybe one out of 10 of those dogs that I’m working with is a pit bull. I can’t tell you what that anecdotal data means — maybe pit bull people don’t seek out a trainer, I don’t know — but I do know that is not the breed I see most often when I am working with people.”

MacLeod acknowledged that DNA plays a part, but she says it’s a history of humans breeding the dogs for fighting and aggressiveness that has created this problem. She encourages pit bull owners to do their part to change the narrative.

“This is a breed that has a reputation, and it’s your responsibility to train appropriately with compassion and with kindness and with science, frankly, so that your dog is a breed ambassador,” she said.

Jefferis, who also serves as the town’s animal inspector, owns a pit bull mix herself and has brought her to events in town and even introduced her to deaf students.

“I don’t take it lightly,” she said. “I never want anyone to get hurt, obviously, but I also would never want to put myself in a position of that level of liability if I didn’t think I had an absolutely solid dog.”

Jefferis did acknowledge that pit bulls can deliver more damage when they do bite, only because pit bulls tend to be heavier and stronger. But she said any larger dog has the same potential.

Jefferis also said many pit bulls — often because of their reputation — come from bad environments.
“So many of them come out of these horrific situations,” she said. “They didn’t get to their puppy kindergarten like other dogs raised in other situations. And then they’re bred and bred and bred.”

Ultimately, it’s up to a potential adopter and the shelter to work together to find a good match. Jefferis said Baypath takes the time to ensure a dog’s personality is the right fit for the home to which they are being sent.

“We matchmake, we make sure that we can set someone up for success based on what we’re seeing and based on science and that kind of thing,” she said. “We don’t even assign breeds, we call them a mix unless we have AKC [American Kennel Club] paperwork, which we almost never do. We just look at them all as dogs.” 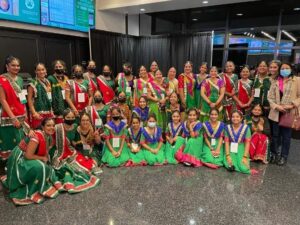 Hopkinton resident Darshana Jani is the founder of PANE, and this marks the fifth time she has taken dancers to a Celtics game.

The local Knights of Columbus’ annual Food for Families Food Drive, which will support the Hopkinton Food Pantry at Project Just Because, will be held March 17-April 3, and again it will be virtual.

Individuals can support the drive in one of three ways. First, send a check made out to Project Just Because with “K of C 4822 FFF Food Drive” in the memo line and mail it to K of C Food Drive, St. John the Evangelist, 20 Church Street, Hopkinton, MA 01748, Second, purchase an Amazon eGift card and have it emailed to pjboffice@comcast.net, adding “K of C FFF Drive” in the message box. Third, make gifts through donor-advised charitable funds by selecting Project Just Because in Hopkinton (Tax ID 06-1728553) and specifying in the use or note area that it is for the K of C Council 4822 Food for Families Food Drive.

“We understand that these are trying times for many, including our own families and friends, and there are an overwhelming number of requests for aid from numerous worthy causes and organizations,” the Knights stated. “Food is a basic necessity, before all others. We truly appreciate your thoughtful consideration and participation in the Food For Families Virtual Food Drive as best as you are able.”

The Hopkinton Fire Department held a retirement party Feb. 23 for Mary Carver, who retired after 25 years as the HFD’s administrative assistant. 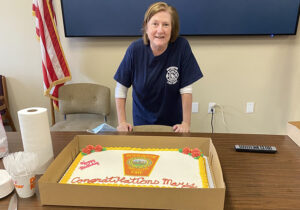 “Mary was the backbone of our administrative piece,” HFD Chief Bill Miller said. “She was outstanding at her job, kept everything running for us, knew the system. It’s a very big loss for the organization.”

Miller said the department was in the process of interviewing candidates to fill the position.