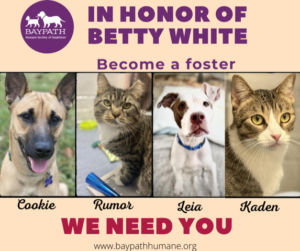 Jim Corsi and Betty White likely never met, but they have something in common following their recent deaths: Both are serving as inspirations.

Corsi, a former Red Sox pitcher who grew up in Newton and later lived in Hopkinton before settling in Bellingham, died Jan. 4 from liver and colon cancer. Two days before his death, WBZ-TV’s Steve Burton (also a former Hopkinton resident) aired an emotional interview with Corsi in which the 60-year-old lamented not getting a colonoscopy earlier in life.

“I should have done it,” Corsi said in the interview. “If you’re out there, don’t wait. Don’t be stupid. I was a professional athlete. I thought I was invincible, strong. You’re not. Cancer is not prejudice to anybody.”

A colonoscopy, in which a flexible tube is inserted into the colon to search for abnormalities, often is recommended every 10 years starting at age 50, sometimes earlier depending on a person’s medical or family history. If cancer is detected early enough, many times it can be treated.

Corsi pleaded with others to undergo the procedure and avoid his mistake.

“That’s my message: Don’t wait,” he said. “You don’t want to end up like this. If you get it soon enough, you’ll be all right.”

Corsi leaves four children, Julianne, Jenna, Mitch and Joey. Julianne was scheduled to get married in October 2022 but moved up her ceremony a year so her father could walk her down the aisle and take part in the celebration.

“It was the most important thing he could have done,” Julianne said in the WBZ piece. “It was just so meaningful and special. It was amazing.”

The widely revered White, who died Dec. 31 at the age of 99, was known for her lengthy acting career, but she also was a longtime champion of animal welfare causes.

Since her death, there has been a national movement to celebrate what would have been her 100th birthday on Jan. 17 by donating money, time or both to an animal shelter.

In response to inquiries and offers of assistance, Baypath Humane Society in Hopkinton is looking to get out the word about its greatest need, which is help fostering animals.

“We are continuing to bring in dogs from down South and take in from local animal control locations, however, we are recently fielding an increasing stream of calls and emails from owners that need to relinquish their pets for various reasons,” reports Baypath’s Kathy Lundgren. “These certainly are unprecedented times, and we haven’t seen a surrender rate such as this. We truly try not to say no to anyone that calls us, and if for some reason we are unable to take them, we try to advise of other shelters that may be able to help.

“Although we do have a nice, strong foster program, we can always use additional people, especially during the colder months when it is harder for our volunteers to take them out. While we are always willing to take monetary donations, this would be a wonderful way to help out a local animal shelter without people needing to spend any money and to honor Betty White.”

For more information, visit the shelter’s website at baypathhumane.org.

Murphy will be missed

Hopkinton lost one a good one with the passing of Fred Murphy on New Year’s Day. Murphy, 77, had battled Lewy body dementia.

A member of the Hopkinton High School Athletic Hall of Fame, Murphy starred in football, basketball and baseball for the Hillers before graduating in 1961. He went on to become a teacher and coach in Framingham and Natick. Among his many community contributions, he served on the Hopkinton School Committee.

On a personal note, having coached one of his grandchildren in multiple sports — alongside one of Murphy’s daughters — it was always enjoyable seeing Fred and his wife, Judy, on the sideline or in the stands, where they were regulars. He was justifiably proud that his children and grandchildren continued the Murphy athletic legacy in town, and did so with class.

The current COVID surge comes at a time when many people were eager to try to get back to a sense of normalcy. The town’s health officials can sympathize. No one is enjoying having to tighten the reins to get this latest wave under control, and that was clear from comments at the Jan. 3 Board of Health meeting.

“All we’re trying to do is what is best for the community,” said Health Director Shaun McAuliffe, whose staff has had to deal with a few angry residents, some of whom have bought into the conspiracy theories floating around social media. “I just would ask that people put all of the partisan stuff aside.”

Added Board of Health Chair Lisa Whittemore: “This has been two years of nonstop crisis intervention, and it’s exhausting.”