Kiran Komaragiri has a simple goal: She wants people to laugh more.

The Hopkinton resident strives to achieve this goal not by performing comedy or creating viral videos but via laughter yoga, a relatively new practice that originated in her native country of India.

“Yoga itself is like a huge ocean,” Komaragiri said. “Laughter yoga is like a tiny drop in that ocean. The focus is all on laughter. The yoga part comes with the addition of deep breathing exercises.”

Komaragiri, who has lived in town with her husband and two children for the last five years and works in the corporate fashion industry, started her program last year during the pandemic, primarily offering it to groups in town. Then earlier this year she started a virtual laughter club for women in the area, called Hopkinton Laughs (hopkintonlaughs.com). 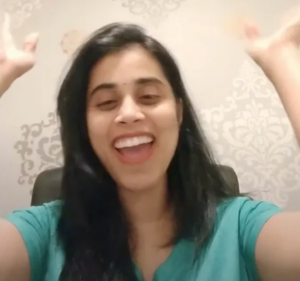 Kiran Komaragiri runs a free laughter yoga class for women in the area, and she leads sessions for other local groups as well.

“I wanted to start a social laughter club five years ago,” she said. “Life kept me from taking to it and starting it. Something like corona was needed, I guess, to just realize that there’s so much suffering and stress all around. That’s why I was like, ‘I just have to do it.’ I think that was the biggest impetus for me, this whole corona and everything people were going through. It started mainly as a thank you to frontline workers. That’s why I started it.”

Komaragiri trained virtually with Dr. Madan Kataria, who founded laughter yoga in Mumbai, India, in 1995. She was inspired by remembering her own childhood that was filled with laughter and wanting to share that with her children.

“As a kid and a teenager, I was somebody who used to laugh at the drop of a hat, very easily,” she said. “I absolutely love laughing. I used to laugh very gregariously as well. … I realized as an adult that I wasn’t laughing as much as I did as a kid or a teen, and I wanted to change that. Especially because now I have a middle schooler and elementary school child, and I wanted to give that to my children, that we laugh together how I did with my mom. I just wanted them to do it with me, and to do that I’m like, ‘I just need to laugh more.’ So, on that journey I discovered something called laughter yoga, the concept. I wanted to get training in it and I did.”

Komaragiri’s 10-year-old daughter, Pallavi, now helps her mother with “almost every session.” Said Komaragiri: “Thanks to her, laughter yoga has become a family affair for us.” Komaragiri also credited resident and participant Sahana Udupi “for her unwavering belief in what Hopkinton Laughs has set out to do” and for spreading the word.

Komaragiri explained that there are three keys to laughter yoga. First, it has to be unconditional, where the participant is not relying on someone or something to make them laugh. Second, it has to be sustained, at least 15 minutes of on-and-off laughter. Third, it has to be belly deep, “which is what brings in the whole deep breathing part of it, which is the yoga part of it.”

“How we do it is, in our sessions we start with playfulness, kind of incorporating those habits of being less inhibited,” Komaragiri explained. “Then bringing playfulness, eye contact between participants. The exercises themselves bring the playfulness element. So these are some key threads that run throughout the session. We start with clapping and try playful rhythm: ho-ho, ha-ha-ha. With that, you’re actually kickstarting the breathing and also the playfulness. Even with that ho-ho, ha-ha-ha you actually take your breathing and laughter from your throat to your chest to your belly. So with various steps like that you kickstart this whole process of belly deep laughter and breathing.”

Added Komaragiri: “It’s just training your body to laugh. And the biggest reason why this works is that your body cannot differentiate between fake laughter and real laughter. Science and research has proven that the body cannot differentiate whether you’re laughing from a joke or you’re just fake laughing. And in no time, that fake laughter, in a community or a group, can turn into real laughter. But even if you’re practicing it by yourself, fake laughter gives the same results or brings about the same physiological and physical changes in your body and brain.”

Komaragiri acknowledges some people will find the concept a bit too strange. In fact, she once had the same doubts.

“When I started, I knew there would be people who say, ‘What is laughter yoga? It sounds silly or childish.’ And that’s part of it,” she said. “I remember even when I was training, even though I am somebody who can laugh very naturally, I found it honestly silly. I’m like, ‘How can you just laugh for no reason?’ And I’m somebody who wanted to do it. There is definitely a learning curve, where people have to be willful. Even the founder himself, he can’t make somebody laugh if you’re not willful.”

Komaragiri said she has conducted sessions with organizations including the Michael Lisnow Respite Center, some hospitals in the area, a local elementary school class and a Sunday school where she volunteers. She also has reached out to the Hopkinton Police Department and Fire Department in hopes of sharing her classes with first responders.

In the meantime, she will continue to run her sessions with other residents, hoping to make someone’s day a little brighter.

“I just want to do this because it makes me happy,” she said. “I don’t charge a single penny. It’s a free social laughter club, where people can come and learn the techniques and practice. It has been satisfying, but we need to get the word out, get more people involved. If I can take any stress away from any one person, that’s my goal.”

Relay for Life returns this month

The annual Relay for Life, a fundraiser for the American Cancer Society, returns this year, but it will look a lot different. There will be no overnight gathering at the Hopkinton High School track. Instead, there is a series of events on May 15 to raise awareness and donations in the battle against cancer.

The day will start with a workout class from 9-10 a.m. outside the Hopkinton Center for the Arts, run by BodyFit’s Torsten Grabbert. From 11 a.m.-12:30 p.m. there will be a luminaria bag decorating party at the senior parking lot in front of HHS. An Uhlman’s ice cream truck will be on site as well.

From 2-4 p.m. there will be a kid-friendly, walking and socially distant scavenger hunt starting at Center School and going around the center of town.

The event will wrap up with the luminaria ceremony — “a socially distant opportunity to gather and honor those who have cancer and those we have lost,” according to event chairs Ashley Wojcik and Megan Murchie — from 7:30-9 p.m. at the HHS track.

Hopkinton’s Debby Cole was among seven volunteers recently honored by Milford Regional Medical Center for logging 1,000 hours of service at the hospital. Each of the volunteers received a pin in recognition of their service. …

The Bishop Rice Council of the Knights of Columbus, which serves Hopkinton and Ashland, reported that its recent Food for Families virtual food drive raised $4,365 to support the Hopkinton Food Pantry at Project Just Because. The total “eclipsed all of our prior efforts,” a grateful co-chair Jim Kenealy stated.