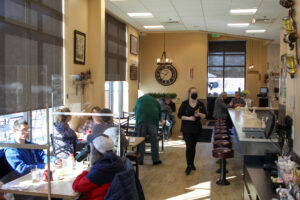 The Spoon reopened for business March 10 after a six-week hiatus for renovations. Owner Sam Prescott said the Lumber Street diner now is better equipped to handle an increase in takeout business as well as expanded outdoor dining. PHOTO/JOHN CARDILLO

Perhaps no businesses have faced a bigger challenge during the pandemic than restaurants.

Now, with restrictions loosening, restaurants are hoping to bounce back. And the community is doing its part to help.

The Hopkinton Chamber of Commerce is organizing a Restaurant Week from May 14-23, during which time there will be promotions, raffles and other incentives to visit local establishments.

“Obviously the service industry has taken a significant hit during COVID, so we were thinking this would be a good way to support the local restaurants and eateries in town,” said Paul Ostrander of Ostrander Insurance, who is organizing the event along with Bryan Brown from Guaranteed Rate. “We’re just trying to encourage people to shop local. Especially over the next year or two. We have a lot of great places in Hopkinton to eat and to shop, and people should take advantage of it as much as they can.”

One such establishment is The Spoon, which reopened March 10 after a six-week hiatus. Owner Sam Prescott — now the sole owner, as former co-owner Bill Morgan has taken on a new venture, opening a seafood market across Lumber Street — said the temporary closing was so she could make some changes to the diner’s layout to better accommodate an increase in takeout orders and outdoor seating.

“Even before the pandemic our takeout business was incredibly busy. Now it’s even increasingly busy, and I think it will stay that way for a few years,” Prescott said. “And since last summer we started using the patio outside, and we’re planning on continuing that for many years. So with the additional seats outside we just needed more space to operate inside. The flow will be nicer, and we will be better prepared for the future.”

Like many restaurants in town, The Spoon is a family affair.

Prescott, who graduated from Hopkinton High School in 2010 and first started working at The Spoon when she was 14, bought into the business five years ago when it moved to its current location. Her mother, Mary, helps run the business, as does Sam’s aunt, Joanne Sables, who has worked at The Spoon for almost 40 years.

“I wouldn’t be able to be where I am or do what I’m doing without the support of my family, and my mom is a very key part in that,” Prescott said. “She’s been absolutely amazing. And my Aunt Joanne holds it all together, and she has for many decades.”

Prescott said business has been good since the reopening, and she is hopeful things will continue to improve.

“I wasn’t expecting too much, still being in the pandemic,” she said. “A lot of our clientele are young families and we have a lot of elderly population, so I didn’t think we’d see a super jump-back into it right away. Honestly, I see great things for the upcoming spring and summer seasons, just what I’ve seen so far. So I’m really happy with where we’re at and where we’re headed.”

Added Prescott: “I really want to thank the community for continuing to support us. They’re really amazing, It makes it easier to run a business with the support that they give.”

Another family-run business is Carbone’s, which last September announced it would be closing soon after 87 years as it sought a buyer for the property on Cedar Street. However, Peter Carbone said recently that he and his sister, MaryAnn Lorentzen, who own the business, decided they would keep the restaurant open while it remains for sale.

Dick Hoyt was memorialized in Hopkinton in 2013 when a bronze statue was erected in front of Center School showing him pushing his son, Rick, in a wheelchair. Team Hoyt competed in 32 Boston Marathons and hundreds of other races — including, amazingly, triathlons — and inspired millions around the world.

Hoyt, who retired from running Boston with Rick after the 2014 race due to health issues, died March 17 at the age of 80.

“Dick and Rick Hoyt had a real and heartfelt connection to Hopkinton, and the feeling was mutual,” said 26.2 Foundation executive director and Hopkinton resident Tim Kilduff. “I’ll remember that connection every time I walk past the Team Hoyt sculpture in front of Center School just a few feet from the Boston Marathon start line, a place that meant so much to Dick.”

Team Hoyt suffered another devastating loss last June when Bryan Lyons, who in 2015 took over pushing Rick in Boston, passed away suddenly at the age of 50.

National Vietnam War Veterans Day, which was established in 2012, is March 29. With pandemic restrictions still in place, Hank Allessio, who organizes events for veterans in town, said there are no activities scheduled this year.

Local Vietnam veteran Barry Rosenbloom said he’s not concerned about any recognition for himself, but he’s pleased to see the respect with which more recent vets have been treated.

“I’m really glad that the last 20 years has been recognized for the current war vets, since 9/11 forward,” Rosenbloom said. “I am glad to see that the country is backing them so much.”

Baypath Humane Society is putting out a call for community members to care for a dog in their home temporarily until the shelter finds them a permanent home.

“Fostering dogs is an incredible experience,” said longtime Baypath volunteer Leslie Doyle. “There is no better feeling than when a frightened dog comes out of their shell and starts to relax and trust you.”

Baypath needs volunteers on a short-term basis who can care for puppies in need of socialization, dogs recovering from or awaiting a medical procedure, shy or scared dogs who need a place to unwind, and dogs who need help learning new skills like leash walking or house training.

Baypath covers medical costs through the shelter veterinarian and is happy to provide food and supplies. The shelter also provides expert behavioral support to help set up each dog for success. Learn more at baypathhumane.org.