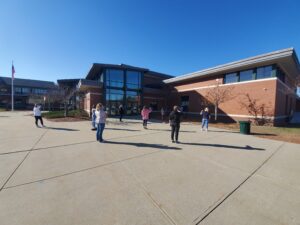 Members of the HHS chorus practice outside the school.

In an unusual year filled with unprecedented obstacles, the Hopkinton Public Schools Music Department was determined that one thing would not occur: silence.

Working in concert, Hopkinton music students, faculty and administrators kept the music playing, even if in a limited form and with some significant changes.

One of those changes was the requirement of face coverings, both for students and their instruments.

Bell coverings protected the faces of their brass and woodwinds, to capture any droplets and prevent potential spread.

That was just one of many changes required for the musicians to continue to play.

In traditional years, music teacher Craig Hay said, “we put lots of people in a room and we make music.”

This year, Hay said, “we couldn’t have done it without the technology department.”

Rooms had to be carefully measured to ensure the required distance could be maintained between students. Air purifiers ensured that air was exchanged every 40 minutes.

Other augmentation was needed, including a camera that is connected to a projector, a digital mixer and speakers. Multiple microphones were attached to the digital mixer.

Thanks to this type of technology, music teacher Isaac Brody, who is teaching remotely, was able to see and hear students clearly. An additional speaker is used when the chorus goes outside to sing.

“People went out of their way to get us the equipment we needed,” he said.

The year of practicing differently will culminate, if all goes as planned, with a traditional event, the annual pops concert the weekend before Memorial Day.

The main football field at Hopkinton High School has been booked for May 23, the Sunday prior to Memorial Day weekend, which is when the traditional pops concert is held. The concert will go on if the weather cooperates and COVID protocols allow.

Each year, this concert represents the opportunity for students to showcase the skills they have honed through the year.

“Yes, the kids love going to class, but the biggest thing is that final performance, to give it all you have and play for an audience,” Hay said. “We know how much this means to the students.” 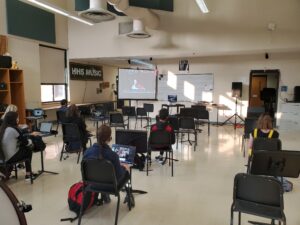 Isaac Brody teaches an orchestra class with some live students and others on a videoconference.

Students in the music program admit that this situation has hardly been ideal, especially for seniors, who are missing the full experience for the last time.

In previous years, Hopkinton High School junior Madison Loos said, her chorus class represented a break from the rest of the academic day, a chance to connect and bond with friends.

“You walked into a class, you greeted each other and hugged each other,” she said. Social distancing has curtailed that. “We’re still all friends, but it’s not the same. It hurts a lot.”

Still, all the students agreed, they appreciate the chance to “do something,” HHS junior Kira Sward said. “Music is a huge part of my life,” she said, and when school shut down last March, she felt the loss.

That reinforced his determination, and that of Brody, to develop a plan to maintain music education, something that not all school districts were able to do. The return required creating a plan and working with very different logistics.

They also needed — and enthusiastically received, Hay said — the support of principal Evan Bishop, superintendent Carol Cavanaugh and her staff, and the School Committee.

Hay credited members of the Tri-M Honor Society for offering feedback and support. The organization is an honor society for students who are musically gifted and academically capable, according to the website.

“We try to give back,” HHS senior Aidan Medeiros said.

One way students gave back this year was by providing feedback, advice and support as the Music Department adapted to a new normal, Hay said.

This year, their role has focused on serving as a “sounding board,” Hay said. He has “bounced ideas off” the group and listened to their ideas on “how to keep students involved. They’ve been outstanding. Over 11 months, using them as my sounding board has been very, very helpful,” he said.

He has aimed to “put students in a position where they feel valued.”

The students return the compliment, citing the efforts of Hay and Brody. Loos said that they “put in a lot of time and worked really, really hard to put this together.”

The students said they look forward to showcasing the results of this unusual year.

Sward said she is “super grateful” to make music this year. The students may end the year on a somewhat different note, but those notes will combine to once again make music.