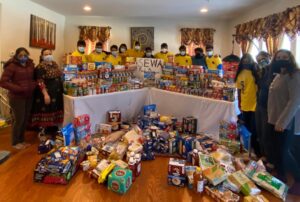 Local volunteers for the Sewa Feeding the Hungry Food Drive pose with the items they collected for area pantries.

A high school student directed his first large-scale food drive this year in Hopkinton, and his group roughly doubled the amount of food collected for local families in need compared to last year.

Shubhanjay Khanal, a Hopkinton High School junior, took over an event begun by his mother, Shova Khanal Sharma, an executive committee member for the service organization Sewa International. He estimated having doubled the volume of food and the number of pantries that benefited.

“He coordinated so well, and I was so surprised,” Sharma said. “He’s already working on other projects. I’m so blessed.”

Khanal and his mother volunteered for the Sewa International Boston Chapter. The nonprofit — named for the Hindu word defining a selfless service or act — dedicates itself to serving those in need regardless of race, religion, gender or other circumstances.

In Hopkinton, Khanal and his fellow volunteers delivered informational flyers to more than 400 households. The team returned a week later to collect donated food — an estimated 3,500 pounds in Hopkinton plus about 1,500 pounds from neighboring towns — which went to area pantries Project Just Because, Worcester Food Bank, Turning Point Shelter and Universal Missionary Church to distribute to families in need. 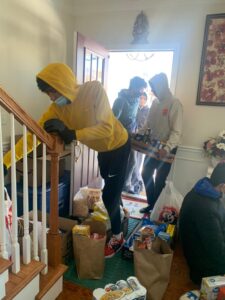 Volunteers collected an estimated 3,500 pounds of food in Hopkinton alone, and more from neighboring communities.

Sharma, who also coordinated a mask donation project for hospitals early in the pandemic, is planning a new event for Hopkinton: a Sewa art class called Mangal Nidhi, where children can create their own piggy banks. Families may choose to donate at the event to the Feeding the Hungry Program or other Sewa initiatives.

The crafts event will take place sometime in the coming weeks, with more information coming soon.

Khanal also plans to continue volunteering for Sewa. He recently helped with an acrylic painting workshop on March 13, open to children 8 and up. The workshop raised funds for the Sewa International Sponsor a Child program.

“It’s to raise funds for kids who are uneducated around the world,” Khanal said. “Basically, all the funds that are raised will be going to help those kids in need.”

Khanal said he felt honored to inspire others to give back to their community, including his best friend, who ran his own version of the food drive in Westborough. He said his mother inspired him to action through her work with the Sewa International Boston Chapter.

“Last year when she did the Sewa Food Drive, I was helping her a little bit and that made me realize my small effort can go a long way,” he said. “Due to COVID, I thought we can do better than last year, and because lots of families were suffering … they needed a hot meal on the table just like we have.”

He texted a group chat of his friends to gauge their interest, and 15 quickly expressed interest in volunteering. One of his friends, HHS sophomore Dhanu Senthilkumaran, also wrote his own article on the food drive for Sewa International’s website.

“I think, especially when he told us, it really inspired us to all work,” Senthilkumaran said. “We all worked really hard to inventory everything and collect all the food. I think he was a really good leader.”

Project Just Because, which runs a food pantry in Hopkinton, was one of the facilities where food was taken for distribution to those in need.

Khanal said he hopes to volunteer for the food drive again at some point. His mother also hopes to see more people in the community involved next year.

“With our peers, a lot of stress, anxiety, everything goes away when they give to the community,” she said. “When they do [something] together with other kids, their thinking level is so different. … Everybody has one goal, to serve the community.”

Added Senthilkumaran: “It’s really gratifying, knowing how your hard work can help one person have a meal for a day, a meal that they would normally not get. Especially when I went to the shelters, many of the people were just so grateful for the food that we gave, it’s just that feeling of gratitude they have that just makes you want to keep doing it.” 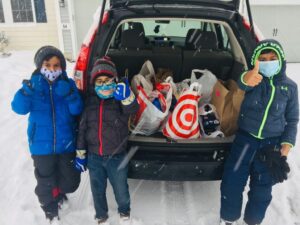