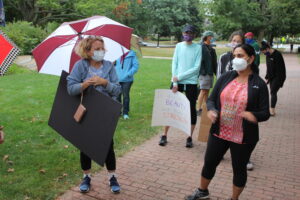 After reading Sunday’s apology from Rich Yurewicz, the Hopkinton motorcyclist who disrupted the India Independence Day celebration at the Town Common on Saturday morning, South Asian Circle of Hopkinton board member Meena Kaushik said she is “relieved that we could solve this amicably.”

“I thought the apology was very heartfelt — the intent, the words and the background he provided,” said Kaushik, who had helped organize Saturday’s India Day event along with India Association of Greater Boston director Guru Samaga. “It takes courage to admit one’s mistake, and I applaud Rich for that. I’m sure that I’m speaking for all the Indian community, they appreciate this too. And this was all that we were looking for.”

In his apology, Yurewicz said he was under the impression that the American flag at the common was going to be lowered and replaced by the Indian flag. Yurewicz explained that his father died fighting for the United States in the Vietnam War, and respect for the American flag is part of his “core values.”

“There was some misinformation, he acted on the misinformation, he had some background which made him do what he did without thinking,” Kaushik said. “We accept the apology, and we are more than glad to put the incident behind us and move on. We don’t want to harp on that at all. We really appreciate that.”

Community organizer Sheila Zarba-Campbell — who helped plan two Black Lives Matter rallies on the Town Common earlier this summer — had organized another gathering on the common for Sunday evening in response to Saturday’s incident, but the event was called off shortly after it started.

“Now that an apology is received, I’ve accepted it, we’ve accepted it, it should be behind us,” Kaushik said. “We can demonstrate about all the things that we want to change next week, or tomorrow, but not today.” 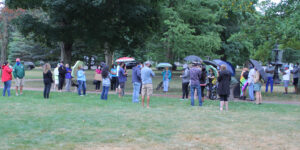 Community members gather on the Town Common for a rally Sunday evening that was called off shortly after it started. PHOTO/JOHN CARDILLO

Zarba-Campbell, who earlier Sunday had written a letter to the editor (signed by dozens of fellow residents) calling for Yurewicz to own up to his behavior, wrote another letter later Sunday welcoming the apology.

“I admire our neighbor Rich Yurewicz for apologizing for his actions on Saturday,” Zarba-Campbell wrote. “His message struck me as heartfelt and genuine. I hope everyone in Hopkinton will join me in applauding his statement and supporting him and his family going forward.”

Added Zarba-Campbell: “Building a cohesive community of people from diverse backgrounds can be hard and messy at times. But I believe it is the most patriotic of pursuits.”

Kaushik said she hopes everyone works harder on cultural awareness and just listening to each other.

“One thing we’ve found is this all stemmed from not having information or having half-information or misinformation,” she said. “Really we should communicate more, we should create awareness, we should be aware of what other cultures are doing. And the onus is on both, it’s on the Indian people as well. And also the rest of Hopkinton to find out more about us.”

Due to the COVID-19 pandemic most in-person gatherings have been postponed, but when restrictions are lifted Kaushik said she hopes residents turn out for cultural events around town.

“We want to do more events so that a large part of the population can come and attend and really enjoy our culture, so they can understand what it’s all about,” she said. “It’s not about us vs. them. It’s about all of us being Americans, just different colors, different foods, different [etc.]. That’s the message that we want to give out.”

Kaushik encouraged residents to like the South Asian Circle of Hopkinton (SACH) Facebook page and visit the SACH website to learn more about the organization and upcoming events. Last year the SACH hosted a Festival of Colors on the Town Common, but this year’s event had to be canceled. The group is considering organizing a Diwali celebration (Festival of Lights) in the fall, posting signs and encouraging people to hang lights in order to get the community engaged.