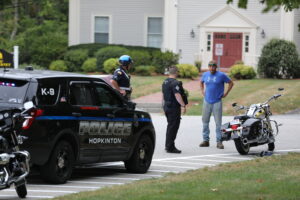 Hopkinton resident Rich Yurewicz talks to police after being pulled over at the Town Common, where he disrupted an India Independence Day celebration. PHOTO/JOHN CARDILLO

Update, Aug. 17: The motorcyclist issued a statement apologizing for his actions, and the apology was accepted by the event organizer.

During Saturday morning’s India Independence Day celebration on the Town Common, a man rode his motorcycle around the common repeatedly, revving the engine and raising his index finger in the air, making it nearly impossible to hear the speakers at the event and leaving the event organizer feeling that it was an act of racism.

An individual came out of a house that abuts the common and attempted to get the motorcyclist, identified as Hopkinton resident Rich Yurewicz, to stop but was not successful. Police were called and they pulled over Yurewicz to talk with him. The individual who had attempted to stop Yurewicz then walked toward him and made a comment. According to an observer, Yurewicz replied, “I live in this town, too.”

According to Hopkinton Police Sgt. Aaron O’Neil, police spoke with the motorcyclist but did not issue a citation. Yurewicz then left the area, and the India celebration concluded shortly thereafter.

South Asian Circle of Hopkinton board member Meena Kaushik, who helped organize Saturday’s India Day event along with India Association of Greater Boston director Guru Samaga, said this is the first such incident she has seen at an India-themed event.

“It felt like a clear act of racism,” she said. “I don’t want to make it into a bigger issue, but that’s what it felt like.”

Yurewicz, who grew up in town, replied to a request for comment by texting the Pledge of Allegiance.

Kaushik posted about the incident on Facebook and said the large majority of commenters offered their support. However, a few people defended the motorcyclist, with one claiming that Kaushik’s group had planned to remove the American flag as part of the ceremony. That was not the case. Kaushik’s group brought its own flagpole and raised an Indian flag, making sure it was lower than the American flag, which is a requirement.

“We were not going to do anything other than putting a separate flagpole next to [the American flag], making sure [the Indian flag was] lower,” Kaushik said. “This was all laid out to the [Select] Board, and Parks & Rec was involved because they control the use of the common. We followed all the guidelines, and we didn’t publicize the event because we didn’t want more than 25 people so we could be socially distanced.”

Parks & Rec director Jay Guelfi confirmed Kaushik’s statement that it was never part of the plan to remove the American flag.