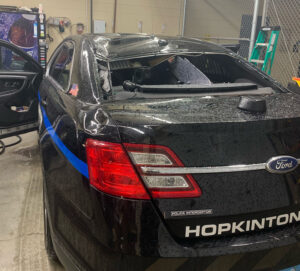 A Hopkinton Police cruiser was damaged by a falling tree. PHOTO/HOPKINTON POLICE DEPARTMENT

A storm that brought heavy wind and rain Monday afternoon and early evening caused some problems in town. The Police Department cautioned that there have been multiple road closures, detours and power outages and encouraged residents to stay off the roads while work is being done to reopen them.

Among the roads closed due to downed trees were Spring Street (near Snowy Owl) and Cedar Street.

The HPD tweeted a photo of a damaged cruiser and explained that Officer Phil Powers was on patrol blocking a street where a tree and wires were down when another tree fell and hit the vehicle. Powers was not injured.