The weekend’s big story started Saturday morning, when a motorcyclist from Hopkinton disrupted an India Day event at the Town Common. Following an outcry on social media, the motorcyclist issued an apology Sunday afternoon, and it was well-received by the event organizer and other community members.

The Hopkinton Board of Health issued a statement on the controversial closure of the outdoor basketball courts in town, saying the players had been warned numerous times that they needed to be socially distancing but refused to cooperate. “The illegal activities represented a public health nuisance and potential public health risk to the residents of Hopkinton,” the board stated. Meanwhile, an Independent poll indicates a large majority of respondents would prefer to see the courts remain open.

The town’s most recent COVID-19 update includes information about the school reopening plan as well as free local testing sites.

The Hopkinton Fire Department contained a brush fire off Frankland Road, in the forested area where a solar array is planned.

The Hopkinton Senior Babe Ruth League team captured the CMass championship over the weekend, giving the departing Hopkinton High School seniors some sense of accomplishment after their spring season was canceled.

Road paving work starts today on Wedgewood Drive, with a detour in place during paving operations. The work is expected to wrap up Tuesday. On Wednesday the DPW will work on Palomino Drive, Clydesdale Road and Claflin Street. Delays should be expected. Work will take place from about 7 a.m.-5 p.m.

Photo of the Day: Saturday’s India Day event at the Town Common paid tribute to the country’s independence from British rule in 1947. 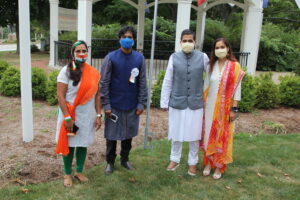 Video of the Day: Here’s a compilation video of pets distracting people who are trying to work from home.

Working from home … with pets pic.twitter.com/d8Y7XKMmi0