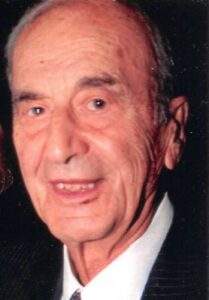 Hagop “Jack” Thomas Vartanian, 90, loving husband of 64 years to Patricia Elizabeth Kiley Vartanian, passed away peacefully with his family by his side on May 15 at JML Care Center in Falmouth.

Born in Watertown to Krikor and Araxy Vartanian on July 15, 1930, Jack grew up in Hopkinton, Milford and Worcester. Jack and Pat resided in Shrewsbury for 20 years and eventually moved to Falmouth and finally Mashpee to enjoy retirement.

Jack was proud to serve his country in the Korean War as a corporal. As his life unfolded, Jack began his working career at the David Clark Company in Worcester as a quality control engineer, designing spacesuits for NASA. He later worked at Raytheon, designing the infamous Hawk missile for the Vietnam War. His pre-retirement years were spent as a Therimage engineer supervisor at the Dennison Manufacturing Company in Framingham.

In addition to his wife, Jack is survived by his three children and their spouses/partners: Carol Molina and Frank Livas, Joan Winters and Shane, and John Vartanian and Debbie. Grandchildren include Chris Winters (Maya), Jessica Chaffin (Aaron), G. Dane Molina, and Matt and Taylor Vartanian. Five great-grandchildren include Porter, Jack, Mavis Kiley, Liam and Julian. Jack leaves behind a sister, Virginia “Nora” Ohannesian, and was predeceased by sisters Grace Bogoian and C “Rose” Keshigian.

Those who knew Jack referred to him as “Gentleman Jack,” always kind, considerate and courteous to all. Whether it was his sailboat The Patrician or Kef Time, his time on the dance floor, playing billiards and bocce with his friends, golfing or gardening, he exhibited a passion for everything he enjoyed, especially spending wonderful times with his family. He lived his life with the mantra of “Enjoy life. … This is not a dress rehearsal!”

Funeral services, under the care of Chapman Funerals & Cremations in Bridgewater, are private. A celebration of Jack’s life will be held at a later date. In lieu of flowers, donations in Jack’s name can be made to the Disabled American Veterans, c/o VA Regional Office, 380 Westminster Mall, Providence, RI 02903 or dav.org.