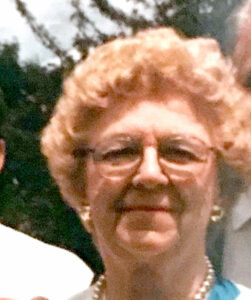 Jessie Claire Larter, 93, of Hopkinton, passed away June 6 at Golden Pond Assisted Living in Hopkinton. Born in East Brookfield, she was the daughter of the late Ellen (Elstrom) and Waldo W. Simpson. She was the wife of the late Howard C. Larter.

Jessie devoted her life to her husband, family and friends. She enjoyed entertaining, especially hosting parties and holiday gatherings at her home.

A funeral service was held June 11 at the Chesmore Funeral Home of Hopkinton (ChesmoreFuneralHome.com), with burial following in Evergreen Cemetery in Hopkinton.