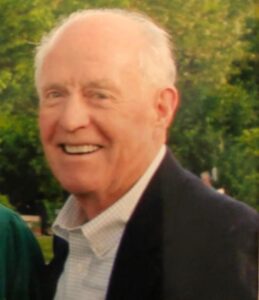 Kenneth Patrick, 90, of Medway — a former resident of Pleasantville, New York; Madison, Connecticut; and Mashpee — passed away on Aug. 15. Born in New York City, he was the last child of 10 siblings born to Katherine (McGee) and George Patrick. He was the husband of 60 years to Bernadette (Morganthaler) Patrick of Medway.

Ken was a veteran of the Army, having served during the Korean War as a combat engineer in the 224th Infantry Division. He went on to work as a police officer for the New York City Police Department’s 42nd Precinct. He took pleasure in playing golf and worked as a grounds crewman on golf courses in Cape Cod. Known for his beautiful blue eyes, Ken loved to dance and play bocce, and he had a quick wit and a dry sense of humor. He had a love of doing carpentry and masonry work and liked to volunteer for the Christ the King Catholic Church food pantry in Mashpee. He enjoyed watching the Yankees and the Celtics.

Besides his wife, Ken is survived by his two children, Maureen Patrick of Franklin and Kenneth Patrick and wife Beth of Hopkinton. He also leaves behind three grandchildren, Connor, Kayla and Leah Patrick; his sister-in-law and brother-in-law, Patricia and Richard Messing of Connecticut, as well as many loving nieces and nephews.

Funeral services are being held privately with family, with interment taking place at the Massachusetts National Cemetery in Bourne. In lieu of flowers, donations may be made to New York Police & Fire Widows’ and Children’s Benefit Fund, P.O. Box 26837, New York, NY 10087 or answerthecall.org. Arrangements are under the care of the Chesmore Funeral Home of Hopkinton.