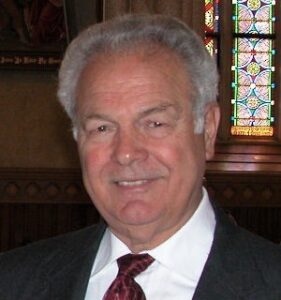 Lawrence (Larry) Stephen Parente, age 89, died peacefully at his home in East Walpole on May 29. Larry was born in Warwick, Rhode Island, on March 26, 1931, to Lorenzo and Luigia (Mancini) Parente, the 12th of 14 children. He attended Lockwood High School in Warwick, where he played football and graduated as president of his class in 1950. He graduated from the University of Rhode Island in 1954 with a degree in civil engineering. Larry served in the Army for two years. He was stationed in Kaiserslautern, Germany, where he used his engineering expertise to help rebuild the city’s infrastructure. Upon his honorable discharge, he married his college sweetheart, Ann V. Amoriggi of Johnston, Rhode Island, on May 11, 1957.

Larry and Ann first moved to Brighton when he began his career at the Army Corps of Engineers. They later settled in East Walpole, where they have lived for 62 years, and raised four children. In 1964 Larry earned a master’s degree in engineering from Northeastern University.  He retired from the Army Corps of Engineers after 35 years and worked another 15 years at a private engineering firm, Maguire Group. One of his proudest achievements there was a tunnel project near South Station for the Big Dig in Boston.

Larry was a devout Catholic and devoted member of St. Mary’s Parish in East Walpole. He was instrumental in building the parish center and helped organize numerous fundraising events over the years. He was a member of the Finance Committee and the Parish Advisory Council, a religious education teacher, and a lector for 42 years. Larry was also one of the original members of a men’s prayer group that met weekly for almost 40 years.

In his spare time Larry enjoyed his vegetable garden and tending to his yard. He always had a project that he was working on, including a beautiful addition to his home, and nothing pleased him more than a job well done. On Sundays in the fall he could always be found watching his beloved Patriots, a loyal fan from their lean years to their more recent success. In his retirement he traveled extensively with his wife, Ann, and volunteered many hours for the Friends of Francis William Bird Park. Above all, Larry was a quiet, hardworking man of great integrity and humility. He was devoted to his family and took the greatest pleasure in the simple things in life, whether it was making homemade wine with his brothers or entertaining his many grandchildren at his workbench. He treated everyone he encountered with dignity and respect, and his kindness and compassion will be missed by all who knew him.

Larry was the beloved husband of Ann V. Parente. He was the loving father of Cheryl Kelly and her husband, James, of Hopkinton, Susan McGillicuddy and her husband, Thomas, of Stowe, Stephen Parente and his wife, Cathrine, of Urbana, Illinois, and Lisa Dougherty and her husband, John, of Dover. He was the cherished grandfather of John, Mary, Joseph, Lawrence, Matthew, Paul, Michael, Emily, Sean, Magnus, Christopher and Andrew. He was the brother of Eva Senerchia of Warwick, Pasquale Parente of Little Compton and Samuel Parente of Cranston, and he was predeceased by 10 brothers and sisters.

As a result of the ongoing and ever-developing health crisis in the world, and with genuine concern for the people whom they love, Larry’s family has decided that his funeral services (under the care of James H. Delaney & Son of Walpole) will be private. A celebration of life will be held when we return to calmer and healthier times, so that we may gather without boundaries to honor, remember and celebrate his life. Memorial donations may be made to The Pine Street Inn, 444 Harrison Ave., Boston, MA 02118.