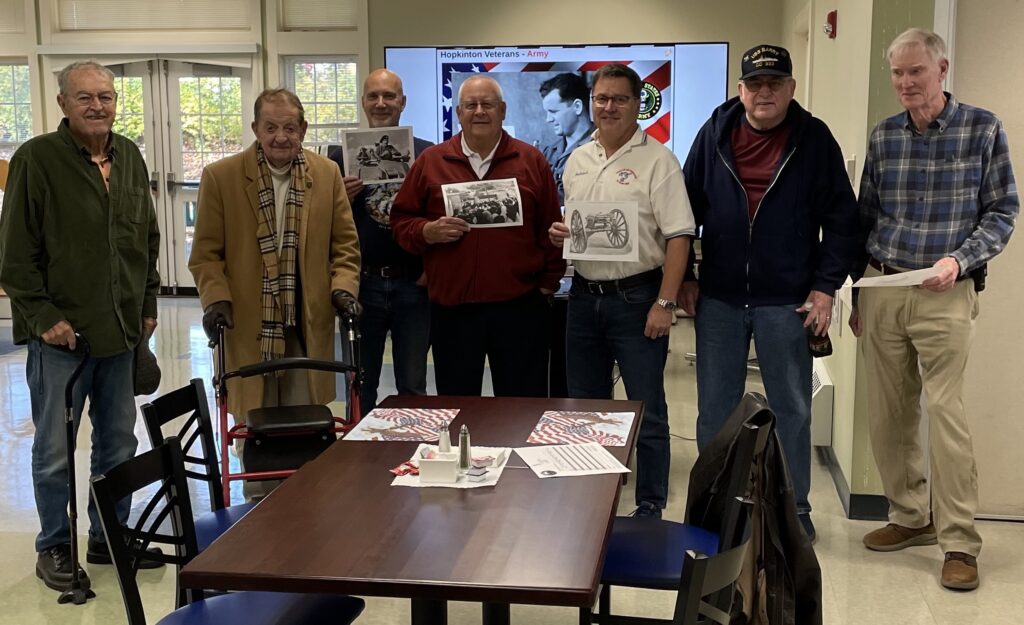 Among the local veterans in attendance Friday were (from left) Jack Westcott (Navy), Fred O’Connell (Army), Ted Hoyt (Army), holding a photo of British General Bernard Montgomery, who was the Nov. 4 victor at El Alamein, Bill Krans (Marines), with a photo of the 1979 student uprising in Tehran, Mike Stockwell (Army), displaying a Gatling gun, which was patented in 1862, Bill Hamilton (Navy) and John Graham (Marines), holding a photo of B-29s that had just dropped the first incendiary bombs in the Korean Conflict in 1950.

Every year, the month of November is filled with military activities, and the Veterans Breakfast on Friday was no exception. More than four dozen attendees (unofficial count of 55) were nourished with good food and good reminiscences of military history. The historical linkage harkened to military events that occurred on Nov, 4, the date of the breakfast.

The next scheduled Veterans Breakfast is Dec. 2.

This Friday, Hopkinton has Veterans Day activities scheduled at 11 a.m. at the Senior Center and 5:30 pm at the Woodville Rod & Gun Club for the annual appreciation dinner. All veterans are welcome; no reservations are necessary.