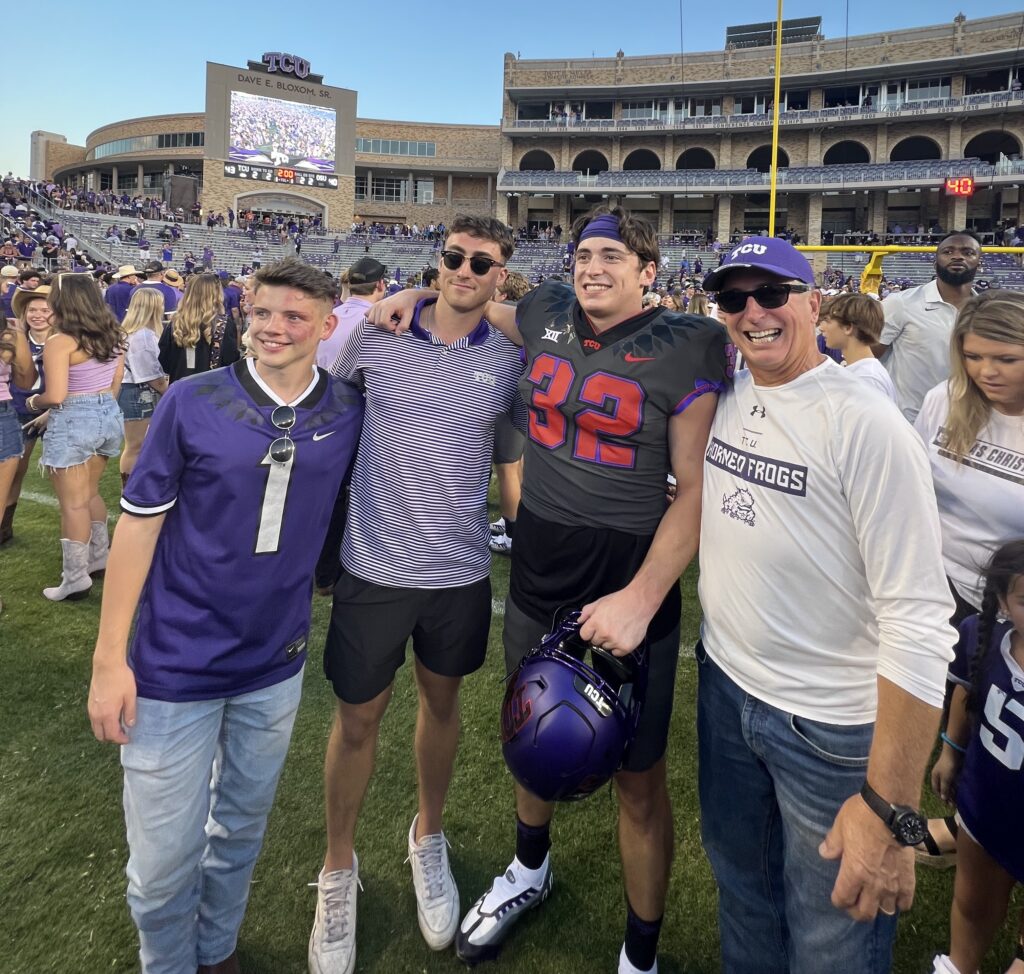 Christian MacDonald, a walk-on wide receiver on the football team at Texas Christian University, was confident the Horned Frogs would have a strong 2022 season after a disappointing 2021. Little did he know how well things would go. TCU won its first 12 games and, despite an overtime loss in the Big 12 Championship Game, secured one of the coveted four spots in the College Football Playoff.

TCU plays No. 2 Michigan in the VRBO Fiesta Bowl at State Farm Stadium in Glendale, Arizona, on Dec. 31, with the winner earning a spot in the Jan. 9 national championship game.

MacDonald is a scout team player, helping prepare the starters in practices. He said he also got the chance to practice with special teams but did not make any game appearances, although he dressed for all the home games and was told he would be making the trip to any and all postseason games.

The team made a change last year, bringing in Sonny Dykes to take over as head coach. Dykes, who previously coached for four seasons at Southern Methodist University, made an immediate impact.

“The whole team has just adapted so well,” MacDonald said. “It’s the perfect change for us. Coach Dykes has done everything right, and that team has responded in such a great way.

“I think we all just thought the sky was the limit when Coach Dykes came here. We weren’t really sure exactly how good we could be, but the amount of work we put in in the winter and the spring with our new strength department was unbelievable. I think we all just had this quiet confidence about us. And especially with everyone doubting us in the Big 12, we always just had this chip on our shoulder, and we had this quiet confidence that we knew we could be really good.”

The Horned Frogs had a number of exciting victories this season, including a 43-40 win over then-No. 8 Oklahoma State in two overtimes on Oct. 15.

“We had a sold-out crowd, we went down early, then we took it in OT,” MacDonald recalled. “It was just unbelievable, fans stormed the field after. It was awesome.”

Making it even more special, MacDonald celebrated on the field with his father and a couple of Hopkinton High School classmates. Davin Evans also goes to TCU, and Drew Nealon, who attends James Madison, flew in for the game.

“It was awesome, it was pretty surreal to look at that picture [of the HHS classmates] after the game,” MacDonald said. “To just think the group of us came from Hopkinton and we’re here now, with one of the best teams in the country, it’s pretty amazing. It was a real cool experience.”

MacDonald said this TCU team reminds him of his group at HHS that went 11-1 and was undefeated in the Tri-Valley League when he was a junior.

“Our team is just so connected,” the criminal justice major said of TCU. “Honestly, it feels like back with the Hillers, we were just all so connected on that team, it felt like a family, and this year we feel like such a brotherhood.

Other Hopkinton products enjoyed individual and/or team success this football season as well.

Luke D’Aloia appeared in all nine games at Colby College. A senior linebacker, D’Aloia ranked third on the team with 62 tackles, including 33 solo and eight for losses, and also recorded 1 1/2 sacks and an interception. The White Mules finished at 4-5.

Aidan Stewart was a member of the Ithaca College team that went 12-1 and reached the NCAA Division 3 national quarterfinals. A junior offensive lineman, Stewart saw action in four games for the Bombers, who won their first Liberty League title. Ithaca beat UMass-Dartmouth and Springfield in the NCAA playoffs before falling to No. 1 North Central. …