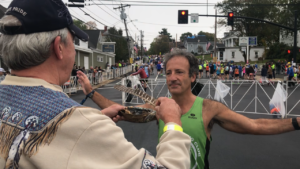 Runner Ted Resnikoff is smudged with the smoke of sage and sweet grass by Hopkinton’s Daniel Eastman prior to last month’s Boston Marathon.

Just before Roxbury’s Ted Resnikoff embarked on his 11th consecutive Boston Marathon run, Hopkinton’s Daniel Eastman smudged him with the smoke of sage and sweet grass. The action is in the Native American tradition, and the Boston Marathon, due to the pandemic rescheduling, fell on Oct. 11, Indigenous Peoples Day.

For more than a decade, Resnikoff has run in honor of the Native American who inspired him to take up the sport, Emmett “His Many Lightnings” Eastman. This year’s run took place just one week after Emmett Eastman died at the age of 89.

Daniel Eastman said he first met his cousin in 2007 after being put in touch by the screenwriter of “Bury My Heart at Wounded Knee,” which was released as a television movie that year. Eastman found out that his connection to the Dakota stretched back to Charles Eastman, a Boston University-educated doctor who became the first Native American to be certified in Western medicine when he graduated from BU in 1890.

“At that point, I didn’t even know I had Dakota relatives, so it was a surprise,” Eastman said. “Through that we developed a bond and got to know Emmett. When he heard we were from Hopkinton he threw out the idea of running in the marathon again.”

An accomplished ultra distance runner, Emmett Eastman had run Boston in 1972 and returned in 2008 at the age of 76.  Resnikoff, a videographer, followed Eastman along the route and was so inspired that he decided to take up running himself.

Emmett Eastman began running after losing his wife and their eighth child, who both died when their son was born and Eastman was 40 years old. Over the next several decades, he ran thousands of miles, participating in marathons and sacred walks and runs around the world.

“He was a member of the group Sacred Run International,” Daniel Eastman said. “They ran ultramarathons around the world to raise awareness about Native American rights and to spread the culture.”

Running took Emmett Eastman to all parts of the world, including Australia, Japan, Russia and all throughout Europe. In 2012, Eastman met Queen Elizabeth II in England during the monarch’s Jubilee celebration.

“He was the one from his delegation invited to go meet the queen,” Daniel Eastman said. “So he got to meet the queen and say hello to her dressed in the full Native American regalia.”

“We went out to South Dakota for years and they always had Indigenous Peoples Day, so we had celebrated it with Emmett there,” he said. “It was always a big powwow and cultural event.”

Daniel Eastman described Emmett as a very “traditional” Dakota. He said the people who were in South Dakota mourning his passing had their spirits lifted by Resnikoff’s run. Daniel Eastman said that, with Emmett’s passing, a chapter of his life has come to a close.

“It was a special connection,” he said.