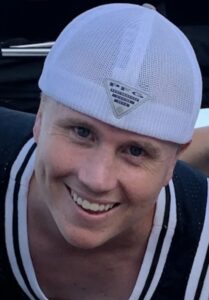 Marshall Skiff Brennan, the beloved son of Edward and Deborah Brennan of Skaneateles, New York, passed away peacefully on Aug. 17 at his home in Boston.

Marshall worked at the Michael Carter Lisnow Respite Center in Hopkinton for the last 12 years as a respected, admired and loved staff member. From helping with the Boston Marathon, supervising outings for his groups and adventuring on Zoom trips to faraway places, he provided love and care to so many.

He loved his family, making music, the Bills, the lake, our dog Fuji, and most of all spending time with his nieces, Reese and Savannah.

Although Marshall was so loving and joyful around family and friends, he struggled like so many with mental health issues. Deeply kind, thoughtful and loving to all he met, his generous spirit and bright light will always shine.

A funeral Mass was held Aug. 29 at 10 a.m. at St. Mary’s of the Lake Church, Skaneateles, with private burial to follow.