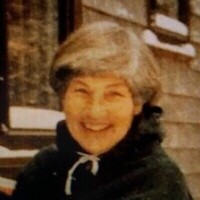 Mary Stone died peacefully on July 20, following a full and happy life of 101 years. She was born to Ella and Henry Lord in Pittsburg, New Hampshire, where she and her sisters helped run the family business, Lord’s Cabins. Mary went on to nursing school in Rhode Island, where she proudly received her RN degree.

Upon returning to Pittsburg, she met her future husband, Norman Stone, who was working for Perini Corporation on a local construction project. Mary and Norman married in 1941 and moved to Massachusetts, where they lived most of their life in Ashland, raising their family and then retiring to Cape Cod. Following Norman’s death in 1992, Mary then moved to Hopkinton, where she remained until her health declined in 2021. Up until her final days, she treasured her family and all those who brought joy into her life.

Mary is predeceased by her husband, Norman Stone, and her sisters, Leora Frain and Myra Brooks. She leaves her son, Brian Stone and wife Penney Stone of Holliston, daughter Beverly Watson and husband Stephen of Weston, and daughter Eleanor Guare and husband Thomas of Greensboro, Vermont. Mary was especially proud of her grandchildren and their families, including Justin Stone, Brandon and Tara Stone, Ken, Kim, Owen and Lily Thompson, Sarah Guare and Anna Guare. Many friends and extended family members, especially Lany Borgerson, enriched her long and graceful life.

Matarese Funeral Home in Ashland is handling the arrangements, which include a private memorial service followed by interment at Wildwood Cemetery.