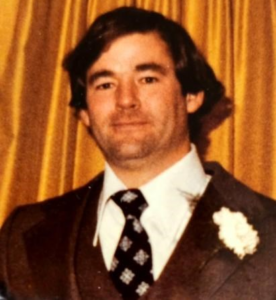 Michael John Dwyer, 73, of Millis died Aug. 29 at Brigham and Women’s Hospital due to complications from Waldenström Macroglobulinemia (WM), a very rare form of non-Hodgkin lymphoma that he courageously fought the last couple of years.

Michael was born in Marlborough, and following his father’s passing, Mike and family resided in Florida for five years, where he attended Miami Military Academy and Blessed Trinity Catholic School. Following the passing of his mother, Michael and siblings resided with his uncle and aunt, Tony and Lucy Cafarelli, in Hopkinton. Michael would eventually attend Hudson Catholic High School, where he was a star athlete in football and baseball. He also was a skilled drummer and played in a rock band with his friends. During his time in Hudson, Michael lived with Glorinda Cellucci Ordway and her husband, Truman. Michael continued his baseball career at Dean Junior College before getting his bachelor’s degree in business administration from the University of Massachusetts Amherst. At both colleges he was joined by his close friend and fraternity brother, Robert “Bubba” Pena of Falmouth, who went on to play in the NFL with the Cleveland Browns.

In the years following college, Michael traveled through much of Europe with some buddies, including George White, the eventual godfather of his son, Timothy. Michael also took a cross country trip and settled in San Diego for a few years. Michael was the proud father to his son, Timothy, who he shared with his former wife, Gail Powers (Ginnetti). Michael had the privilege to live in Falmouth for many years and took great pride in watching his son participate in sports during his formative high school years.

Michael had a deep passion for sports, fitness and nutrition. In his middle years, Michael fell in love with the sport of tennis, and he played many matches with Timothy. Eventually, golf became their new sport, and they continued to forge a special bond. Michael also was an avid runner, becoming a bit of an icon on the streets of Millis and participating in many races, including the famous Falmouth Road Race for many years with his son.

Michael also was a learned man with an endless thirst for knowledge in far-ranging topics in science, history and technology. Michael liked to liven things up at family gatherings, frequently treating them as a performance stage. He also became an endearing member of the local community around his Millis residence, where he lived for 27 years.

Michael was the son of the late Richard Henry II and Virginia (Cellucci) Dwyer, and he was predeceased by his brother, Richard Henry Dwyer III.

Michael is survived and beloved by his son, Timothy Dwyer of South Boston; his sister, Mary (Dwyer) McCullough and husband Kevin of Wrentham; his nephews, Kevin Jr., Luke and Michael McCullough and their wives, Elizabeth, Emily and Jennifer; Shaughn Dwyer; his niece, Colleen Dwyer; and his cousins, Maureen Welzel and Jean Curtin. He also was a loving great-uncle to nine.

A graveside service for Michael will be held on Oct. 8 at 11 a.m. at Immaculate Conception Cemetery on Beach Street in Marlborough.

In lieu of flowers, donations can be made in Michael’s honor to the Jimmy Fund (jimmyfund.org). Checks can be sent to Dana-Farber Cancer Institute, 450 Brookline Avenue, Boston, MA 02215.