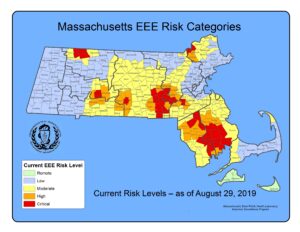 Aerial spraying of insecticide was conducted in late August after the state designated Hopkinton and several other area communities at critical risk for the mosquito-borne virus Eastern Equine Encephalitis (EEE). According to the Hopkinton Health Department, a human case of EEE was confirmed in a young adult in Grafton on Aug. 16, and EEE-infected horses were identified in Mendon and Uxbridge, raising the risk for surrounding communities.

The critical risk designation means the Massachusetts Department of Public Health (MADPH) strongly recommends that all outdoor activities scheduled from dusk to dawn be canceled or rescheduled to reduce human exposure to mosquitoes during their peak times of activity. Residents also are urged to use insect repellent, wear protective clothing, eliminate potential breeding areas around the yard and repair damaged screens.

The aerial spraying, using a pesticide called Anvil 10+10 — which contains the ingredients Sumithrun and Piperonyl butoxide — complements the ground spraying that already had been conducted in some Hopkinton neighborhoods earlier in August.

For more information, visit the the Hopkinton Health Department website at hopkintonma.gov or the MADPH website at mass.gov/dph/mosquito.

A 20-year-old man was arrested Aug. 24 at his Hayden Rowe Street home after allegedly attempting to kill his mother’s small dog.

According to the police report, Adam Moses’ mother told officers her son became upset after the dog damaged his hat. Moses then chased the dog with a rock. Moses’ mother was able to take the rock away, but Moses pushed her aside and tried to choke the dog, which weighs between 10 and 15 pounds. Moses’ parents were able to get the dog away unharmed.

Moses was charged with cruelty to animals and domestic assault and battery. Police added two counts of malicious destruction of property worth more than $1,200 after Moses caused damage to a sprinkler in his jail cell.

Judge David Cunis ordered Moses held on $500 bail. Moses was told to stay away from his parents and to avoid contact with domesticated animals.

Moses’ lawyer, Caleb Koufman, stated that his client was dealing with “some sort of mental health issue.”

A pretrial conference was set for Sept. 20.