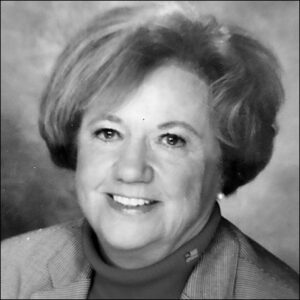 She was born in Jackson Heights, New York, on Dec. 3, 1931, to the late James and Margaret (McLaughlin) Cullen.

She was the beloved wife of the late Donald P. Kelly and is survived by their children, Brian Kelly and wife Brenda of Hopkinton, Jean Kelly Kass and late husband Thomas Kass of Bourne, Christopher Kelly and wife Diane of Framingham, and Kevin Kelly and wife Kristina of Boston. “Mimi” to her grandchildren, she leaves behind Matthew Kelly of Boston, Jacqueline Cox and husband Joseph of Framingham, Brendan Kelly of Hopkinton, Thomas Kass and wife Samantha of Scituate, Harrison Kelly of Arizona, Meagan Kelly of Boston, and Erin Kelly of Boston; her sisters, Audrey Concannon of New York, the late Margaret Cullen of Natick and husband Martin of Ireland, and the late Kathleen Cullen of New York; and her very close nieces and nephews, James Duddy, Christine Cartwright, Patrick Cullen and the late Nora Cullen. In addition, she leaves behind her dearest friend, Andrew Soma of Framingham.

Pat graduated from Bishop McDonald High School in Brooklyn and St. John’s University. Prior to marriage, she began her career at J.P. Morgan in New York. In 1961, a move from New York took the young family to Framingham, where Pat happily raised her family with her husband, Donald. She restarted her career with a paralegal degree from Bentley University in the early 1970s while working for the law firm of Hargraves, Karb, Wilcox and Galvani in Framingham, and then the Perini Corporation in Framingham, where she became the first woman officer of the company. Upon her retirement, she launched a successful career in real estate with Coldwell Banker.

Pat was the eldest sister of four girls, growing up in Queens, New York, and took that responsibility very seriously with everything she did. She was a driving force with a bright and kind personality up until her final day, which complemented her tremendous sense of humor. She cherished time spent with family, especially the weekly Sunday dinners at her house as her family grew with grandchildren over the years. She also loved vacationing with the extended family during the summers at the Cape. She was an inspiration to many and especially to her children, their spouses and her grandchildren.

The family would like to send their deepest gratitude to the staff at Brookhaven Hospice and Golden Pond Assisted Living for all her loving care.

Private services are under the care of the Duckett Funeral Home of J.S. Waterman & Sons in Sudbury.