Plays, pints, music, more at Hopkinton Center for the Arts 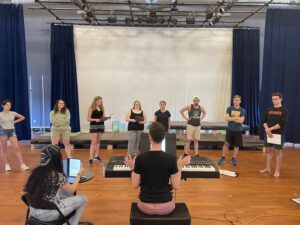 Cast and crew of “Firebringer” rehearse for the upcoming production at the Hopkinton Center for the Arts.

The Hopkinton Center for the Arts caps off the summer with three August productions: a comedy musical set in prehistoric times, a children’s production of “Willy Wonka Jr.,” and a one-act play festival offering pies, pints and social activism.

Director Alyssa Rae Surrette and music director Eric Balboni are producing the two musicals for Enter Stage Left. The first of these, “Firebringer,” features a small cast of high school and college students acting out the story of a tribe of cave-people who make the discovery of a lifetime. Performances run Aug. 8, 9, 13 and 14 in the Delbridge Family Performance Space.

Elementary and middle school students make up the cast of “Willy Wonka Jr.” The production follows British writer Roald Dahl’s original narrative, as the main characters enter into a contest to win a lifetime supply of candy and a free tour of Willy Wonka’s candy factory. Performances run Aug. 20 and 21 in the outdoor amphitheater.

“I’m excited to be back at HCA and ESL and to kind of get back into whatever our new normal looks like when it comes to performing,” Surrette said. “I’m excited for hopefully a packed house for these young and budding artists.”

HCA Executive Director Kelly Grill directs two of the four one-act productions for the festival “A Play, A Pint & A Pie.” The festival occurs in the outdoor amphitheater on Aug. 28, lasting about two hours. Paul Champlin and Karen Trachtenberg direct the other two productions. The four plays were chosen from more than 100 scripts from around the country submitted to judges.

Audience members may present their tickets at the festival for a free meat pie and pint of beer, with more items available for purchase throughout the event. The directors also will ask audience members to vote on their favorite play toward the end of the festival.

Surrette, Balboni and Grill are very excited for the return of in-person rehearsals and live productions.

“The best part was the actors coming out so excited like, ‘Oh my god, you’re doing something,’ ” Grill said. Many of the young actors have not performed live in more than a year.

“With COVID, I haven’t really been able to create with my students for a really long time,” Surrette said. “Last summer, we did online, but it’s different. … They are just so hungry to create and to have fun and enjoy this ensemble-building moment. I’m enjoying it for, if nothing else, the joy it brings to them just seeing them get back to what makes them happy.”

Balboni, the music director, called the music for “Firebringer” exciting, fast-paced and fun, and he has a positive impression of the casts for both productions.

“The music [of ‘Wonka’] is iconic, some of it’s really challenging,” Balboni said. “We’re diving in, we’re rolling up our sleeves. But there’s such a great attitude, I think that the younger ones especially missed this. … Being in the [HCA] space with them, teaching the parts … it’s just such a great experience to have again.”

Surrette also enjoys having a positive rehearsal space created by the “Firebringer” cast and production team. She and Balboni said the high schoolers and post-graduates have gotten along very well.

“My approach to directing in general is more of a collaborative process,” Surrette said. “I think it’s really important for actors to have a say in what they’re doing and in the development of their character. With such an ensemble-based show, it’s very easy to start that conversation and keep that ping-pong back and forth of what we’ve been doing.”

Longtime stage actor Gene Houk advertised the rules for “A Play, A Pint & A Pie.” Along with Grill, Paul Champlin and two others, he also judged the plays sent in for the festival. The judges received a total of 106 scripts from across the United States as well as Canada, England, Ireland and Belgium.

“I think it has given the readers an enrichment to their lives, to read these plays,” Houk said. “It has given us things to talk about beyond the play itself. … And this has been a great experience so far.”

The judges emphasized social activism as a bonus for determining which plays to pick. One of the plays confronts themes of gender bias. Another is a comedy following the interactions of two women with dementia who live in a nursing home.

“Our goal was to involve as many poignant points that need to be talked about in the modern world as possible,” Houk said. “There are some laughs, it’s not all serious. But it all has something to say.”

Houk took inspiration for the one-act festival from his involvement in theater groups based in Midland, Texas. He ran the McLaren Comedy Festival for a few years.

Grill also came upon the idea for pints and pies after seeing traditional Scottish theater in Edinburgh.

“At any given day during lunch, they had some of these pubs that you literally go in and you get a play, a pint of beer and a pie,” Grill said. “I thought, oh, that sounds fun. … So, the two ideas sort of came together.”

Surrette and Balboni both emphasized the performers as a main reason for people to see their upcoming productions.

“For us to celebrate the youth and their passions is really important,” Surrette said. “Also, who doesn’t love a good show?”

Added Balboni: “These singers are putting themselves out there and they need to be received. If you come and just sit in that audience and experience the theater, you are going to be giving them energy that they’re going to give back to you as the audience.”

Tickets for “Firebringer,” “Willy Wonka Jr.” and the “A Play, A Pint & A Pie” festival are available for purchase at the HCA website (hopartscenter.org).