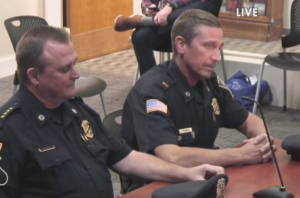 Prior to being approved by the Select Board on Tuesday as the new deputy police chief, John Porter shared his story of overcoming a rough childhood with the help of the Hopkinton Police Department.

Porter said he was the child of an abusive father and was fortunate that HPD officer Chuck Wallace (since retired) took him under his wing when he was a teenager, helping him avoid going down the wrong path. Porter has been a police officer since the age of 19, when he started in his hometown of Upton. He joined the HPD three years later and has served in a variety of roles in his 27 years here, including school resource officer and sergeant.

“I’ve been in this town coming up on 30 years now. It’s like a second family to me,” Porter said. “It’s grown, it’s changed, and luckily I’ve been able to grow and change with it. I wouldn’t be what I was if it wasn’t for what the Town of Hopkinton and the men and women of the department have given me and made me.”

Another individual who has had a big influence on Porter is current chief Joseph Bennett, his longtime coworker.

“Choosing your second in command is one of the most important decisions that you can make at the top,” Bennett said. “Since taking over as chief, Lt. Porter has been a steadfast second in command, reliable and consistent. He’s capable of much work.”

Porter called Bennett his “other life partner” — while his wife keeps him grounded at home, Bennett keeps him in check and grounded at work.

The Select Board voted unanimously to approve Porter’s promotion. The position has been vacant since Bennett was promoted to chief last year.